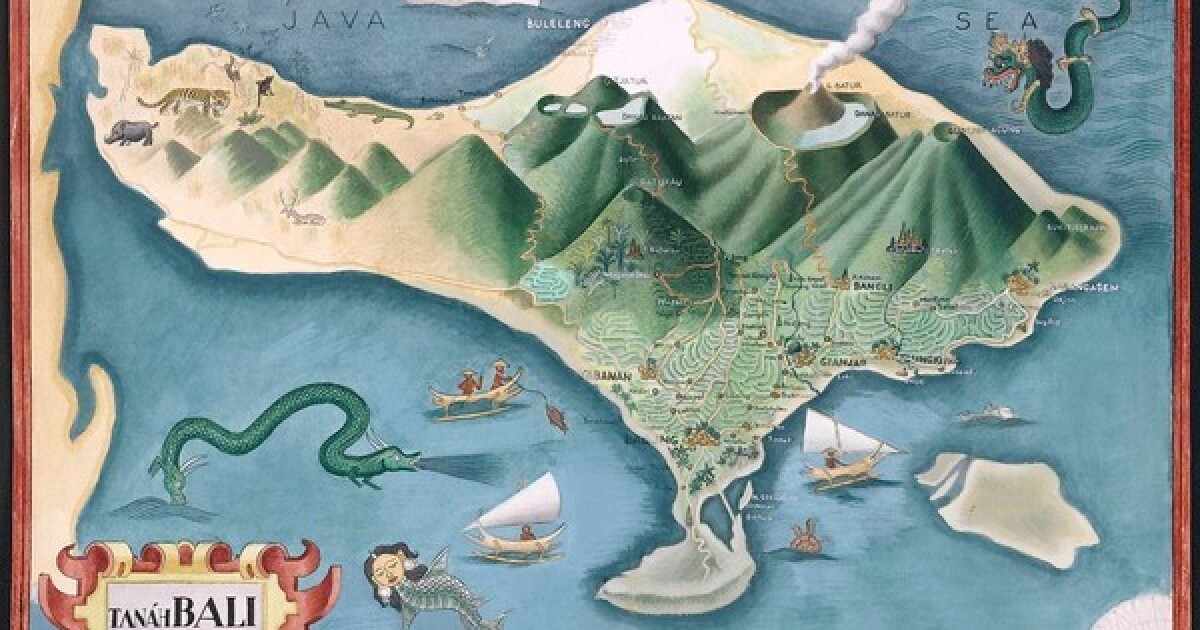 Bali: a look at “Bali: Art, Ritual, Performance” at the Asian Art Museum in San Francisco

In 1930, Mexican artist Miguel Covarrubias and his wife Rose traveled to the island of Bali in Indonesia and quickly fell in love with what they saw. They stayed for nine months, soaking up the natural beauty and distinct culture. Covarrubias later wrote a classic book titled â€œThe Island of Bali,â€ which somewhat eclipsed the art he made on the trip. One of these paintings is a stylized map of Bali, showing the diamond-shaped island dominated by steaming volcanoes towering over lush valleys and hills in rice terraces. Temples dot the land and in the ocean, dragons and mermaids swim as a cruise ship pulls away.

The menu – featured in an exhibit here at the Asian Art Museum titled “Bali: Art, Ritual, Performance” – aptly sums up the alluring appeal that has made the island synonymous with exoticism. Without forgetting a land of contrasts.

Bali is a Hindu enclave in the middle of the most populous Islamic country in the world. The island is lush but also densely populated, divided into rice fields clinging to the hills that make great photos but backbreaking work.

Its inhabitants are renowned for weaving artistic and spiritual practices into daily life, but the history of the island is drenched in blood, from the Dutch conquest in the early 1900s to a dirty war against suspected Communists in the 1960s. With an area of â€‹â€‹only 2,000 square miles, Bali has tens of thousands of temples. The Balinese language has no word for religion – the culture is so saturated with notions of the divine that none seem necessary.

â€œTheir lives were filled with complex and formal delights,â€ observed anthropologist Margaret Mead in the 1930s. â€œThe richness and vibrancy of the island’s cultural traditions are as evident today as they were then. “, Notes museum director Jay Xu in the exhibition catalog. “Bali continues to inspire artists, performers, academics and movie stars, all drawn to a unique culture where art is an integral part of everyday life.”

The show, which runs through September 11, is the first in the United States to look at Bali’s art and culture in general. More than 130 objects – including sculptures, musical instruments and textiles – are on display. â€œWhat makes Bali really interesting is the intersection between indigenous beliefs and Hinduism,â€ says curator Natasha Reichle, who worked on the show for five years. â€œThese objects are generally not put in museums. You go to a ceremony and see them in use.

The museum has scheduled 60 music, puppet and dance performances over the next few months to revive the cultural context for which many of these objects were designed. â€œWhat’s really funny is that the exhibition has such a wide range of media,â€ says Reichle. “It’s a really rich environment in the galleries, trying to show the breadth of culture and how these objects connect to each other.”

Bali has long been a melting pot of influences. Indian traders introduced Hinduism, which gave new names to the ancient gods of the native animists. The opening section of the show highlights the role of agricultural deities and ancestors in Balinese society. Palm leaves, for example, are folded into doll-like figurines depicting the goddess of rice and fertility Dewi Sri, to whom farmers make daily offerings.

Rice is the island’s staple food, and the tools used to harvest it feature a remarkable blend of utility and artistry. Consider, for example, two beautiful knives on display. One is an elegantly tapered staff with a floral design cut in half by an iron blade, the other a wooden carving of a rooster with the blade almost hidden underneath.

Chinese merchants left behind piles of coins with a hole in the center, which the Balinese tied together with string to create sculptures of deities. Some coin images are enhanced with faces and hands carved in wood while others are elegantly dressed in cotton and silk and sheathed in gold leaf.

For the Balinese, the gods are not distant and distant, but honored guests who are invited to inhabit statues of deities when they visit Earth. Divine objects are not static museum pieces but honored participants in rituals and processions. Some are carried in ornate gilded wooden palanquins, such as a fantastically decorated example in the exhibit that was chosen for the 1900 World’s Fair in Paris, where the Dutch Pavilion of Balinese Art caused a stir.

The second section of the exhibition traces the development of court culture and the complex rituals that governed religious life. One of the most spectacular rites was cremation, which for the wealthy involved erecting a large covered platform to accommodate a sarcophagus to be burned – an example of which is on display. Nearby is an intricately drawn ritual bark cloth intended to burn with the body, which has somehow survived and offers a rare glimpse of an artistic creation designed to go up in smoke.

A painted wooden sign depicts a widow and her servants throwing themselves into a fire to join her deceased husband – a practice that persisted into the early 20th century and was one of the justifications for the overthrow of the island’s ruling families by the Dutch.

The royal Balinese penchant for ritual was taken to extremes when many rulers and their courts marched directly under gunfire from the Dutch and the survivors committed suicide rather than surrender. The Dutch then looted and burned many royal palaces, with the loot being shipped to museums in Holland.

In fact, the vast majority of the exhibits come from two Dutch museums, the Tropenmuseum in Amsterdam and the Rijksmuseum voor Volkenkunde in Leiden; Fowler of UCLA has also loaned a number of works.

Shadow theater (or wayang kulit) is one of the great Balinese art forms. Although the puppets – flat buffalo skin figures mounted on bamboo sticks – are only seen in shadows cast behind a screen, they are still beautifully painted and fully realized works of art. Accompanied by a ringing gamelan orchestra, the puppets replay scenes from Hindu epics such as the Mahabharata. Performances can last all night.

The final section of the exhibition examines the effect of foreign visitors on Balinese art before WWII. There is a large selection of designs by Covarrubias depicting the imposing cylindrical offerings that Balinese women wore on their heads; the offerings included mixtures such as flowers, rice, incense, and cooked chickens.

As Noel Coward wrote in a hotel register in the 1930s: “It seems every Balinese native / From womb to grave is creative / And although the results are quite clever / There are too many artistic effort.