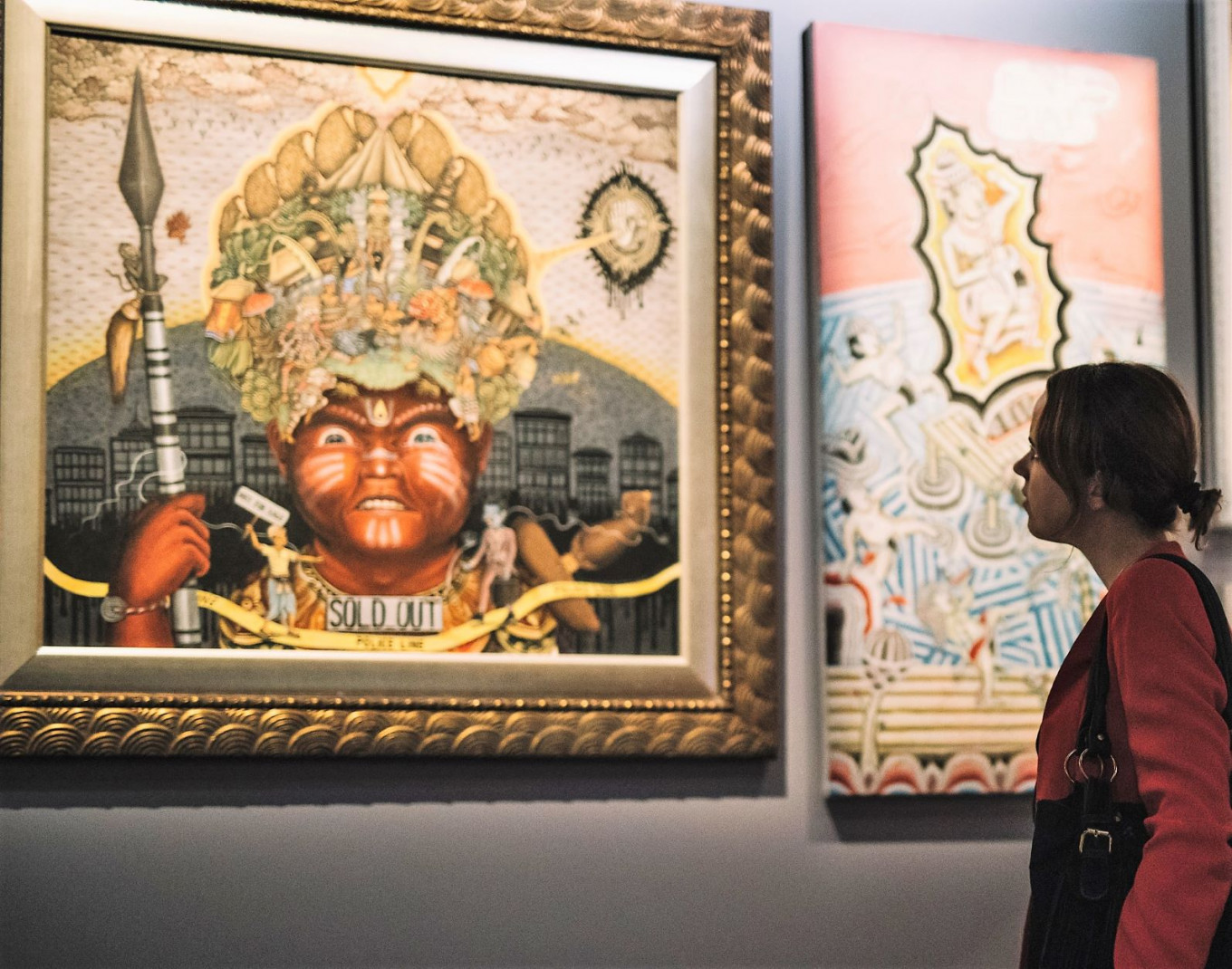 A Dutch museum is holding its first major exhibition on one of the world’s most famous islands until May 26, covering Bali’s unique form of Hinduism, its bloody colonial past and current environmental threats.

“Our idea is that you come to the exhibition with the knowledge of a tourist and leave as a seasoned traveler,” said Francine Brinkgreve, curator of South East Asia at the Volkenkunde museum, at the opening of the exhibition. “Bali – Welcome to paradise” in Leiden. .

The Volkenkunde Museum, also known as the National Museum of Ethnology, is one of the oldest ethnology museums in the world.

Despite being located on the other side of the world from the small island in East Java, the Netherlands has centuries of historical ties to Bali through its colonial rule of the Indonesian archipelago.

Brinkgreve said the exhibition aims to educate visitors about “the other side of marketing and tourist havens. […] using current personal stories, historical and contemporary objects, religious and everyday art, photographs and films â€.

The entrance hall of the exhibition has giant screens depicting “paradise” in the form of waves breaking on a white sand beach, tourists in temples and Balinese in colorful traditional costume. Two beach chairs with parasol are welcomingly arranged in the middle of the hall.

The exhibition then opens with five thematic rooms: the first room provides tourist statistics and their links with the island’s agriculture. A hallway filled with textiles, knick-knacks and other typical memorabilia leads to rooms showcasing Dutch colonial history in Bali, Hinduism and art. The exhibition ends in a spacious area showcasing the main rituals of the island, with a full-size surround display.

â€œThe rooms are located in such a way that visitors start with the most obvious images of Bali and slowly gain a deeper understanding of the island and its people,â€ said exhibition organizer Anna Tiedink.

One of the topics that the exhibition clearly intended to highlight is Bali’s growing environmental problem: just behind the big screen displaying the “paradise” beach is an image of the Kuta seaside, literally buried under plastic waste. Directly opposite, an equally large screen shows the typical congestion of overcrowded Bali towns.

Besides the mountain of trash left behind by millions of tourists, artist and environmental activist Made Bayak makes an insightful cultural observation about local contributions to the waste problem. â€œIn the past, we ate leaves and tosses, which was good because they are biodegradable. But with plastic it’s very different, and our people still aren’t fully aware of it, â€he says in a video.

Made also talks about Bali’s water problem created by the growing tourism industry. â€œA five-star hotel uses more water in a day than an entire village. This puts the island’s agriculture, which was previously key to Bali’s existence, under intense pressure, especially as acres of arable land continue to be sold to real estate developers and turned into hotel complexes or villas.

The looming environmental disaster has a silver lining, the exhibit notes: Beneath the image of Kuta’s plastic horror is a video from the Soul Surf Project, one of the many environmental organizations active in Bali.

The Soul Surf Project focuses on educating children about the environment and encouraging them to participate in tackling the problem. â€œDuring our visits to Bali, we became increasingly aware of local initiatives trying to solve the plastic problem,â€ noted Brinkgreve.

She points out that “Welcome to Paradise” is the first exhibition on Bali that places the environmental issue in context: “Past exhibitions in Bali focused mainly on art, culture, religion and rituals”. 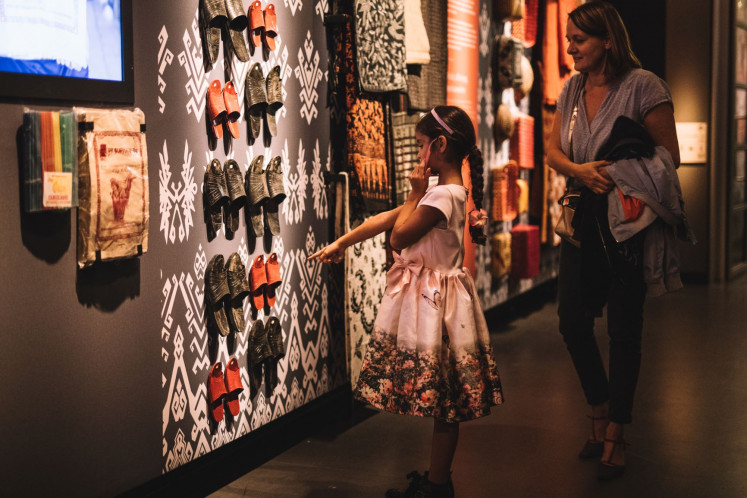 Sightseeing: Visitors view typical Balinese souvenirs in a hallway of the â€œWelcome to Heavenâ€ exhibit at the Volkenkunde Museum in Leiden, The Netherlands. (Credit: Museum Volkenkunde / Kirsten van Santen)

A video featuring I Dewa Ayu Evayanti, a 26-year-old who works in a villa, sums up how much tourism is part of the life of many Balinese: â€œI have been selling postcards to tourists since I was in third grade. year. she says.

When Mount Agung rumbled and erupted in 2017, Ayu Evayanti said the villa had been vacant for at least a month. â€œWithout tourists, we would be unemployed,â€ she says.

About 40% of the 14.4 million international tourists received by Indonesia in 2017 traveled to Bali, which represents only 0.2% of the country’s total land mass.

In the same year, the island also received 8.7 million domestic tourists. Compare that to the hundreds of foreign tourists who visited Bali in 1900, when the Netherlands was tightening its grip on the island.

The Dutch colonized the island relatively late: it was not until the early 20th century that the Balinese kingdoms were brought under control. This period was also marked by the infamous puputan ritual, in which kings, royal families and hundreds of subjects committed suicide rather than surrender to their enemy.

On one wall of the exhibition is a quote from painter WOJ Nieuwenkamp, â€‹â€‹who was in Bali in 1906 to collect items for the Volkenkunde Museum. His testimony of a puputan in Badung reads: â€œOur soldiers stood with cannons at the entrance (of the palace). Each time, a hundred Balinese – men, women and children – passed in front of the gates. The men stabbed the women and children to death, rushed at the troops, and offered to be shot. [â€¦] The king himself came out carried on a sedan chair, dressed in all the adornments and ended his life like the others. 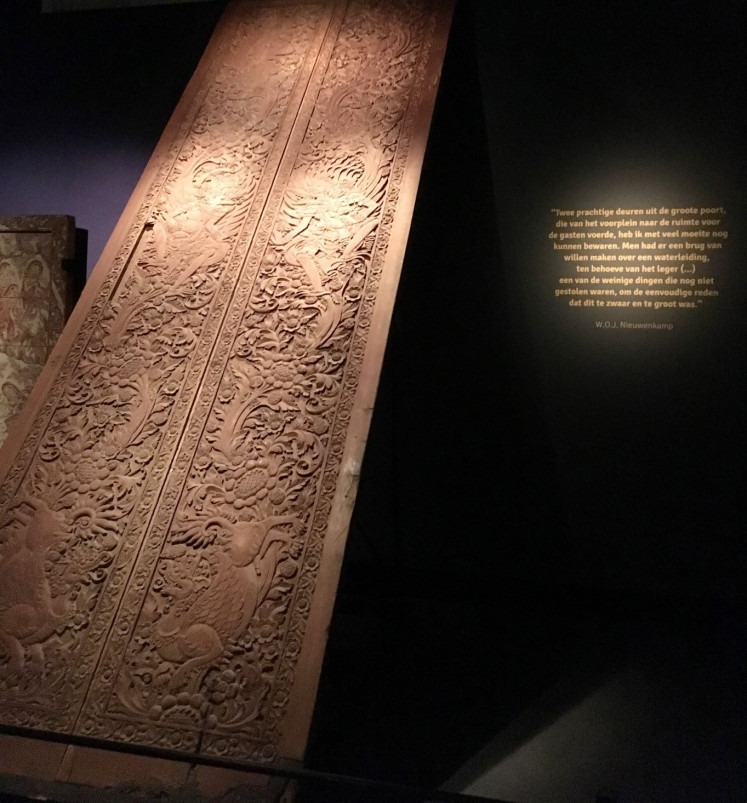 Silent Witness: These intricately carved wooden double doors of Badung Palace witnessed the tragedy that occurred at the turn of the 20th century when the Dutch overpowered the Sultanate. At a height of 4 meters, the doors are arranged at an angle to fit into the exhibition hall. (Linawati Sidarto / -)

The most impressive object in the exhibition is a silent witness to this tragedy: a four meter high intricately carved wooden double door from Badung Palace.

â€œThey (the Dutch soldiers) wanted to use the gates as a bridge over some water pipes for army useâ€¦ Nieuwenkamp observed.

The exhibition explains that â€œin order to make people forget the violence in the Netherlands and the rest of the world, the colonial government created the image of Bali as an island paradise. In no time, the tourism industry took off â€.

The local art community has received international momentum from a group of European painters who have worked and settled in Bali, such as Walter Spies, whose work is part of the exhibition.

In an essay on the exhibition published in the Trouw daily, philosophy professor Jos de Mul noted: â€œThe spies insisted that Balinese painters adapt the format of their paintings to the size of tourists’ suitcases. “

Works by young artists are on display alongside more traditional Balinese paintings in the exhibition’s art gallery, such as that by I Wayan Aris Sarmanta Bali Not For Sale (Tangis Amarah Pulau Kecil), which depicts an angry red-faced child with an island-shaped crown and the words â€œSold Outâ€ on his chest.

Tiedink, who had never been to Bali before her research trip last year for the exhibit, said what surprised her most was “how actively the younger generation is involved in their religious customs. and cultural, â€as the Bali Life Cycle videos show. rituals of marriage, tooth filing, birth ceremonies and cremation.

However, mention of contemporary violence on the island is conspicuously absent from an exhibit that attempts to show the dark side of Bali: the massacres that followed the failed 1965 coup blamed on the Indonesian Communists, and the terrorist attacks. terrorists of 2002 and 2005 who killed hundreds. Balinese and foreign tourists.

â€œSpace was limited and we had to make choices,â€ Brinkgreve said in response to the omission.

Rob Badoux, a visitor to the museum, mostly saw the sunny side of the island. â€œIt’s beautifully staged: the rituals, the colors. It really inspired us to go and visit Bali, â€he said.

Hansje Heller, who visited Bali last year, said she particularly liked “the combination of art and history” in the exhibit. (ste)