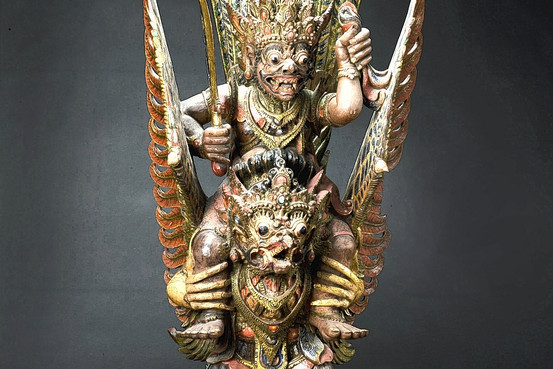 Bali, one point among the 17,500 islands of the Indonesian archipelago, has become the number one tourist destination in Asia. Almost unknown to outsiders before the 1930s, this fish-shaped island – 95 miles from nose to tail, 69 miles from belly to back – now hosts 2.5 million visitors a year who provide most of the income for its four millions of inhabitants.

Visitors come for the tropical climate, the wide white sand beaches and spectacular sunsets, the opportunities for surfing and diving, the backbone of the volcanic mountains (which send land and water in from deep ravines to picturesque plateaus of green rice fields), new seaside resorts and souvenir shops, thousands of temples, and the artistic heritage of its religious and ritual past.

This heritage includes colorful processions in which descending deities are carried into the air under tall umbrellas and curving palm trees; native dances and dramatic dances in elaborate costumes and masks, to the sound of a gamelan’s clang-bong; and intricate woodcarving, metalwork, and hand-woven fabrics.

The Asian Art Museum in San Francisco subtitles its current exhibition â€œart, ritual, performanceâ€. The three are in many ways indistinguishable, the product of a unique form of Hinduism that incorporates animistic and ancient ancestor worship practices, as well as borrowings from places like Java and China. Separate gods and goddesses are to be invoked and thanked with offerings and ceremonies, sacred images, symbols and syllables for birth and childhood, marriage and death, rice crops, house building , ordination, filing of teeth, good health, good sex, etc. There are also demons and monsters to appease.

The temple ceremonies are built around these events, as well as water rites, the transport of images inhabited by gods in procession and the making of large trays or high towers of offerings to the gods. Large funeral processions inevitably end with the ritual cremation of not only the deceased, inside an animal-shaped sarcophagus, but also elaborate wooden structures erected on it. After the ceremonies, the temple offerings are either eaten or thrown away before they rot.

One of the problems with exhibiting Balinese rituals and artifacts in a museum is that many of them are temporal or ephemeral. Balinese dance and theater depend on real people performing in real time, just like the trance-inducing sound of a gamelan, which can go on for hours. The museum can show the costumes and headdresses of the dancers, large carved and painted masks, motionless shadow puppets, the richly carved and gilded drums, the bells and mellophones of a gamelan. But something important is lost.

The Asian Art Museum has done its best to bring its exhibit to life by importing more than 25 dancers, musicians and artisans from Bali, and bringing in local practitioners and experts. There will be over 60 live performances and demonstrations during the duration of the show.

Video monitors in the galleries, meanwhile, will display scenes of barong boar dancing, a cremation ceremony, street processions, shadow theaters, shirtless men singing around a fire. In a remarkable interactive video by Martin Percy, you can watch (at the museum or online) a number of different things happening at a festival last August at a three-temple complex.

Seventy-one of the 130 pieces in the exhibition come from Dutch museums, the rest from other Western collections. The nine small kingdoms into which Bali was divided were dissolved between 1882 and 1908 by the Dutch, who in the process destroyed several royal palaces. Their inhabitants sacrificed themselves or were shot. The most valuable content was shipped to the Netherlands, sold or scanned by subsequent western visitors. Most of the treasures that remain in Bali are locked within the temple grounds, with the exception of ceremonies, and never leave the island.

Woodwork and fabrics tend to rot in a tropical climate; most of the artefacts here date from 1850 to 1950, including intricately patterned symbolic hangings hand-woven with silk and metal threads. The two best wood carvings come from the collection of the Museum of Asian Art itself: a pair of brilliantly carved and painted statues of two legendary Hindu adversaries atop their gigantic winged mounts. Wisnu (aka Vishnu), the most admired Balinese deity, rides the mighty Garuda. Demon King Rawana bares his fangs and opens his eyes astride his horrible mount Wilmana.

The show’s signature image is of a 40-inch-high, wonderfully carved and unpainted palanquin, a sedan chair partially open on carrying poles, designed to carry a divinely inhabited figure aloft. during processions. There is also a richly painted palanquin with long carrying poles to carry a living royal figure, whose feet were not meant to be seen in public touching the ground.

Entire pieces of wooden buildings were salvaged from Dutch demolitions, or subsequently commissioned by the new colonial masters. These include a pair of 12-foot-high doors, freed from a palace burnt down in 1908, and the entrance porch of a temple, all carved with impressive intricacy, as well as a replica of a pavilion. cremation. The most impressive of these architectural pieces is a carved and painted lintel depicting a pair of intertwined winged lions, with bright eyes and red skin, ravaging a deer and wearing the Royal Dutch Crown. Two richly carved and gilded thrones here were rescued from the Klungkung Royal Court of Justice when the palace itself was destroyed.

Natasha Reichle, who organized the exhibition, and Deborah Clearwaters, who organized the public programs, deserve praise for this recreation of a complex culture. To see now if the Bali they present can survive the hordes of tourists.

Mr. Littlejohn writes for the Journal on West Coast Events.