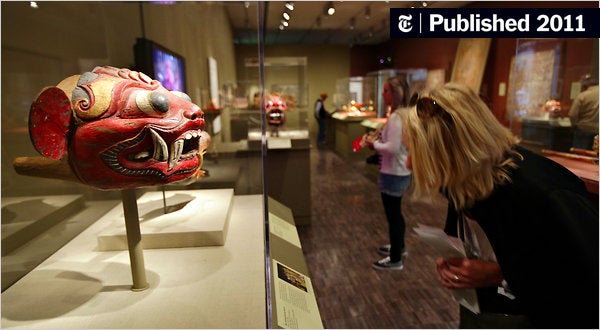 SAN FRANCISCO – On a recent weekday afternoon with nothing special, I walked into the Asian Art Museum here and found a Balinese gamelan concert going on: thundering gongs, pulsing drums, jazzy flutes, all truly heavenly, with musicians seated cross-legged on a fabric-draped platform and an enthusiastic crowd of museum visitors, many very young, on benches, folding chairs and the floor.

Events like this – free, at impromptu hours, with a feel of improvisation – have popped up regularly at the museum during the tenure of its current director, Jay Xu, who arrived in 2008 and has managed to keep the venue on the right foot. way during a recent financial crisis.

Several years ago, the museum borrowed a large sum of money to renovate its premises in a redeveloped downtown library. But in the post-2008 economy, its loan repayments have become impossible to meet and rumors of possible bankruptcy have been circulating. The city stepped in to help. The disaster was averted. The doors remained open. And about a week ago that incredible music – like the sound of a thousand clocks striking – filled the air.

The concert was inspired by “Bali: Art, Ritual, Performance», The museum’s current and lively special exhibition, as stimulating to look at as it is to think. Among other things, it offers a plausible model on how to make a historical loan which a) uses unknown and affordable materials (many of the objects come from Dutch ethnographic museums); b) refines the controversial issue of authenticity by transparently linking an art past to the present of tourist art; and c) gives us exoticism but tempers it with realism.

Bali itself achieves a similar balance. Despite its paradisiacal reputation, it is a modest place: a single small island less than 100 miles in diameter among the hundreds of islands that make up the Indonesian archipelago. Yet it packs a deep and dramatic story within its narrow confines.

The island’s volcanic soil is ideal for certain types of agriculture. Rice grown in semi-aquatic rice terraces is the staple crop, and indigenous religious beliefs seem to have always centered on water and vegetation. Patterns suggesting swirling waves or interlocking spores cover a bronze drum top from the first or second century CE. And rice goddess images woven from palm fronds are still kept in shrines in farming villages. The show features three examples made between 1920 and 1950: doll-like but majestic figures with square shoulders, pinched waists, and a Turandot headgear.

Other belief systems have gradually been superimposed or integrated into the cult of nature. Veneration for deified ancestors is common, as is devotion to a pantheon of deities derived from South Asian Hinduism, a religion once ubiquitous in Indonesia but only found there in Bali.

This interweaving of spiritual commitments has produced a web of ritual practices so enveloping and intricate that they lend religious luster to virtually everything on display, from paddles of rice to dance masks to gold vessels for the betel leaf, a mild tobacco chewed stimulant that is regularly offered to party guests and gods. We are now accustomed to the idea, or should be, that art created for ritual use, like Balinese art, loses a vital part of its meaning in an institutional setting. Exhibition organizer Natasha Reichle, associate curator of Southeast Asian art at the museum, recognizes the problem posed by context, and approaches it reasonably, through wall labels, photographs. field and documentary videos.

All of this is fine, although at least a few things don’t seem to need further help. They emitted sparks no matter where they were. A small 19th century ivory sculpture of a crouching winged lion, taken from a temple offering box, is a nugget of pure, coiled energy, pulling and holding the eye like a magnet.

Some images of carved and painted wooden temples operate on an inverted and repulsive dynamic. They seem to be doing what they can to scare us away. This is what happens in a representation of the demon Ravana, arch-villain of the “Ramayana”, who sits, surly and bloody mouth, on the back of an equally enraged bird.

And who would want to approach the female deity Rangda, with her golf ball eyes, monster fangs, and limbs spread out in an obscene dance? A wall label explains that she is sometimes taken for a witch, sometimes an incarnation of the Hindu goddess Durga. But a glance tells you what you really need to know: You are in the dangerous presence of a life or death force on the loose.

Death and the dead play a central and complicated role in Balinese life. Extravagant material and emotional resources are invested in the well-being and appeasement of worried ancestors. No assemblage of static objects can truly capture this performance-based dynamic, but exhibition videos can and do, recording funeral ceremonies that span months, if not years, and involve burial. , the exhumation and burning of corpses, accompanied by processions and feasts.

However, large funerals are not the norm: they cost a fortune and are the privilege of the royal or the rich. Likewise, much of the art in the exhibition reflects the taste of the elite of a hierarchical society based on the four-caste system derived from India, with the first three castes controlling most of the wealth. and the lower caste, representing the bulk of the population, doing the basic work that sustains the economy: agriculture until a few decades ago, now the tourism industry.

To its credit, the show notes these social realities. The catalog in particular reminds us that at least part of what we’re looking at – earrings adorned with gemstones, for example, or a silk envelope adorned with gold leaf flowers – was intended for a clientele. very specific, namely the rulers who competitively staked kingdoms in different parts of the island.

The final section of the exhibition also discusses the impact of European colonialism on Balinese life and culture. Although most of Indonesia was under Dutch control throughout the 19th century, Bali was not fully subdued until the early 20th century, when the Dutch felt the need to consolidate their hold over the whole. of the archipelago.

To this end, between 1900 and 1910 or so, Dutch troops invaded the island on several occasions, attacking its kingdoms one by one. In at least two battles, one in 1906 and the other two years later, Balinese royalty, knowing they risked defeat, suicidally headed for European fire.

The start of the 20th century became a nadir in Bali’s fortunes: poverty and disease were rampant. Defensively, the Dutch claimed to have rid the island of despotic kings and indicated that a once flourishing local slave trade was evidence of native barbarism.

Simultaneously, the colonial government began to promote the image of Bali as a tropical Eden, where traditional arts were still produced by a picturesque population who otherwise were content to spend their time harvesting rice in pretty terraced fields.

To this day, tourist hotels are built to admire such fields, ignoring the reality that rice cultivation is backbreaking work. And while much of Bali’s traditional culture is still alive today, essential characteristics have changed, including the idea that art, as a category, is defined by spiritual utility. Many pieces of the spectacle of the first half of the 20th century were made expressly as tourist souvenirs.

Expanding Bali’s history into the 21st century would have involved investigating not only the constant incursion of world culture on the island, but also the devastating effects of religious politics when, in 2002 and again in 2005, militant Islamist groups attacked Balinese seaside resorts. .

The exhibition doesn’t go there, although it goes even further than many do in balancing romance and reality in a narrative of a culture and its art. If one result is to undermine precious illusions about a heavenly past, another is to keep glories of the past alive in the present, like the supernatural sound of Balinese chimes sparkling in an ordinary urban afternoon.

Bali: a look at “Bali: Art, Ritual, Performance” at the Asian Art Museum in San Francisco