In the eight-team final, they scored 20.738 to take first place on the podium.

Despite receiving the fewest points for difficulty, the Hungarians topped the leaderboard with exemplary scores for artistry and execution where they scored 9.250 and 8.250 points respectively. 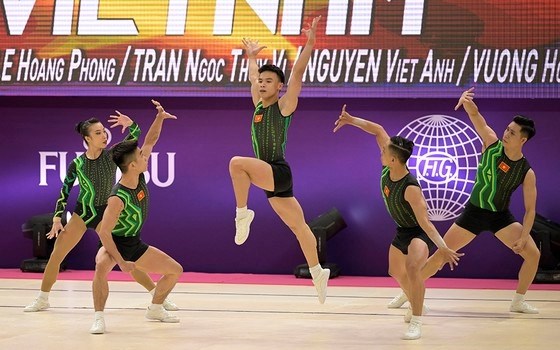 Bulgarians Antonio Papazov, Tihomir Barotev and Darina Pashova won the silver medal with 20.188 points on the board. While Vietnam’s Vi, Thanh and Phong narrowly missed out on second place as they had to settle for bronze with 20.183 points.

In the mixed duet final, Hungary continued to dominate, with Fanni Mazacs and Daniel Bali scoring 20.700 to take the lead.

Tamires Silva and Lucas Barbosa of Brazil combined 20.600 to finish second and Vietnamese Phong and Vi totaled 20.550 for bronze.

Vietnam also sent Thanh to compete in the men’s individual class, but he finished fourth, behind athletes from the Republic of Korea, Spain and Italy.

After three days of competition, Hungary took the lead in the medal standings with three gold, two silver and one bronze. The Republic of Korea came second with three gold medals. Ukraine placed third with one gold and one silver.

Vietnam was fourth with one gold and two bronze.

The world championship was the first international competition for Vietnamese athletes after the recent 31st Southeast Asian Games.