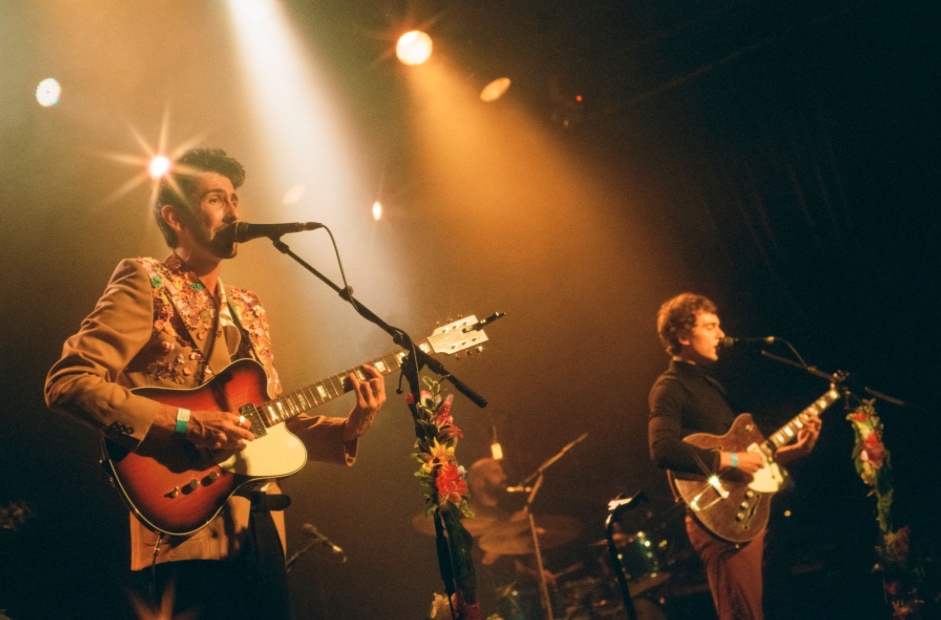 I’m with James Draper and Jordan Brady from Winterbourne.

Obviously, gigs, tours and everything in between are all on hold until the foreseeable future, but we’re here to talk about their writing, their documentary film, Revolutionary, and the ins and outs of the industry.

When did you meet?

â€œ2007 St Edwards School just down the hill. We both had a love for music and we both started playing guitar at the same time, so it all started out of a mutual love for music.

The group has been the same all these years, no other members, although they have gone through a few names.

“I remember walking around at lunchtime saying we needed a new singer, but that never happened.”

â€œOur first band names were Meltdown then Militiaâ€¦ very aggressive names haha. Winterbourne comes from the name of my aunts and 3 cousins, we just took it straight from them â€

James and Jordan built their musical careers through grind and busking.

â€œWe were at Martin Place and Townhall every weekend, then at the Pit Streets mallâ€
â€œWe went down and built it from the acoustics to the hookup, to these full street shows every Friday, Saturday and Sunday. It was crap and really difficult as you had to arrive very early in the morning and compete with the other buskers for the place. Arriving at 4 am and waiting for the spot, that was our income for a few years.“

The boys have now been signed to Universal, which happened when they performed on the streets.
The manager of Island Records came by and picked them up.

â€œOur relationship with our label, the guy who signed us is a good friend of ours, so we don’t have the relationship where it looks like a big business where you try to get them to read your emails.
We are very lucky like that. We had endless discussions about signing before making the decision, there was another label that was an option, that was smaller and cooler, so I guess we’ll never know what that looks like.

I asked if their art came from their emotions or if it was a fairly calculated process.

â€œIt’s both. As we learn more, you learn to calculate more, as you should. You don’t want to just hear someone sing about their emotions, because that’s not good.

â€œWe recognized in the songs what we liked about them and then imitated them, and once you do that, pieces of you come out of imitation and you keep doing it and it gets super addicting. “

â€œIt’s a strange thing. People speak as if the music is composed only by themselves. We wrote with lots of people and it’s never like that, it’s always calculated. Finding the inspiration to do it is the feeling part, the rest is work â€

Jordan and James made a documentary film called Revolutionary, which you can watch on Youtube here.

The film plays with different stylistic choices, weaving between breaking the fourth wall, fiction and reality. The name Revolutionary comes from cycles, starting over and over again, rather than being “Revolutionary.”
The film follows them both and their journey to play Metro. It was their biggest dream when they were playing in the streets, and they finally got there.

They had filmed their show live and then thought why not put it back together with other footage, creating a past, present and future in a fun way.

The stylistic choice, weaving between storytelling and the like, allowed them to break away from the feeling of watching our band and everything we did.

â€œIt’s really important to us, but why would anyone care. It’s so hard to care about someone else’s life, and you don’t really need too much of it. So for us we’re these two guys who started out in a mall and now we’re playing this show and 1300 people have come and sang the lyrics to our song, like it’s mind blowing to us. To try to convey that fact, without being like watching what we did, because it’s just pathetic, people are playing in front of 100,000 people.

â€œWe always wonder if our 15 year olds would like this. We are then the height of the dream, and so these are our harshest critics. In that sense, we think it would be a source of inspiration for young emerging artists. “

What do you think of fame i asked

â€œIt’s hard to have any authority on the subject because we’re not famous, but as long as we are recognized, it’s always a pleasant experience. Because for us it’s not like they see us on TV, they heard our album maybe at night, and it’s always amazing to hear that. That’s what prompted us to do it in the first place.

“If our next single was a worldwide hit, as is expected haha, I think we can keep our feet on the ground”