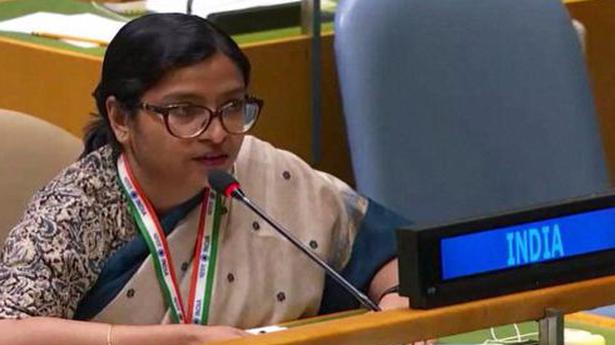 Criticizing Pakistan, India said the country continued to foster a “culture of violence” at home and beyond its borders as it attacked Islamabad for using the Platform of Nations United for hate speech against him.

Also read: Drones are the tool of choice for Pakistan-based terrorist groups

“A culture of peace is not only an abstract value or principle to be discussed and celebrated at conferences, but must be actively integrated into global relations between and among member states,” said Vidisha Maitra, First Secretary of the Permanent Mission of India to the UN. at the United Nations General Assembly on Tuesday at the high-level forum on the culture of peace “Transformative role of the culture of peace: promoting resilience and inclusion in post-COVID recovery”.

â€œToday we witnessed yet another attempt by the Pakistani delegation to exploit a UN platform for hate speech against India, even as it continues to foster a ‘culture of violence’ at home and beyond its borders. We reject and condemn all such efforts, “she said.

Read also: After the return of the camels, drones used for cross-border smuggling

India’s firm response came after Islamabad’s UN envoy Munir Akram raised the Jammu and Kashmir issue and spoke about the late pro-Pakistan leader Syed Ali Shah Geelani in his remarks in the General Assembly Hall which focused almost entirely on India and not on the theme of the forum.

Ms Maitra said there is no doubt that terrorism, which is a manifestation of intolerance and violence, is the antithesis of all religions and cultures. “The world should be concerned about terrorists who use religion to justify these acts and those who support them in this quest,” she said.

Stressing that India will continue to spread the message of humanity, democracy and non-violence, she said that India reiterates its call for the application of the principles of objectivity, non-selectivity and impartiality. to form the basis of discussions within the United Nations, in particular on the question of religion.

“The United Nations, including the United Nations Alliance of Civilizations and member states, should refrain from any selectivity on such issues that hamper a culture of peace,” she said.

While noting that the COVID-19 pandemic has underscored the interdependence and interdependence of humanity like never before, she said that even during the pandemic, â€œwe have seen an upsurge in intolerance, violence and terrorism â€. â€œEven in the midst of the pandemic, we face the ‘infodemic’ challenge which has been responsible for an increase in hate speech and the seedling of hatred within communities,â€ she said.

Last year, in June, India and 12 countries co-sponsored the Interregional Declaration on â€œInfodemicâ€ in the Context of COVID-19 – a first such declaration by UN member states.

Ms. Maitra told the high-level forum that the principles of democracy, pluralism, compassion, cultural diversity, dialogue and understanding form the basis of the culture of peace.

“India is called a country of ‘unity in diversity’. Our concept of pluralism is based on our ancient philosophy of ‘Sarva Dharma Sambhav’ which means ‘equal respect for all religions’,” she said. stated, referring to the 1893 speech by the great Indian philosopher Swami Vivekananda at the Parliament of the World’s Religions in Chicago, where he impressed India’s civilizational ethic of accepting the greatness of all religions.

“India is not only the birthplace of Hinduism, Buddhism, Jainism and Sikhism, but it is also the country where the teachings of Islam, Judaism, Christianity and Zoroastrianism have been found. strongly rooted, â€she said.

â€œThe culture of peace is the cornerstone of any world order aimed at building inclusive and tolerant societies. Since the adoption of the United Nations Declaration and Program of Action in 1999 at the request of Bangladesh, the Culture of Peace agenda has provided an effective model for multilateral action to promote solidarity and understanding â€, she declared.