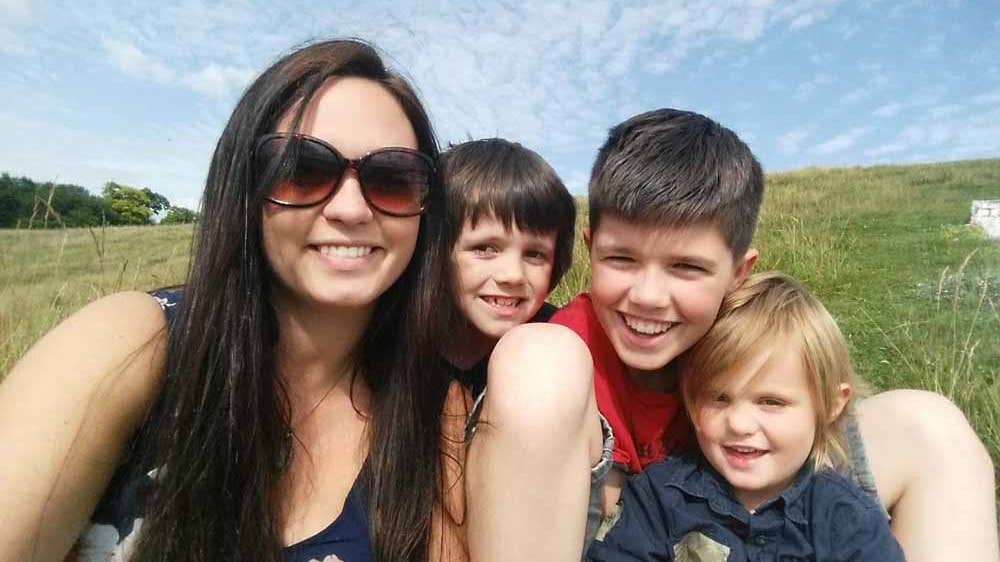 Bride-to-be who longs to dance at her wedding but faces internal decapitation at any moment needs £50,000 for brain surgery so she can walk down the aisle

A bride-to-be who longs to dance at her wedding but faces internal beheading at any moment is desperate to raise £50,000 for brain surgery so she can walk down the aisle and get her life back.

Forced to put plans for her big day on hold, Louise Turner, 36, learned last year that she had a combination of conditions that made her neck muscles too weak to support her head, leaving her in a wheelchair and unable to leave home without a neck brace.

Fearing she could die at any moment, Louise, who lives in Ashford, Kent, with her science teacher fiancé Robin McNicoll, 33, and her four children Luis, 18, Sidney, 14, Travis, 10, and Astraea , nine, feels her only hope is for the surgery to be available in Spain and is now desperately trying to fund it, saying: “I try not to think about what might happen because it’s terrifying.

“When we first got engaged in April 2019, it was the happiest day of my life.

“We were at an oak tree with a swing, Robin asked to take my picture and he asked me how much I loved him. I didn’t know what to answer and he asked me if that was enough for the marry. I was euphoric. It was the best feeling.

“It was so romantic. At the time, we could never have imagined something like this happening.

“I want to be able to enjoy my marriage. I don’t want to scream and scream in pain on what should be the best day of my life.

“I used to always dance with my kids, but I haven’t been able to for two years and I desperately want to dance with them again on my wedding day too.

“But we have to accept the fact that we may not have this special day for a very long time because all our money is going towards the surgery.”

Unable to work now, Louise, who was a carer, says her problems started after a minor car accident in December 2019 triggered more than two years of constant, excruciating headaches and relentless pain all over her body.

She said: “Over the next few weeks I started having headaches and neck pain, but I assumed it was whiplash.”

Sadly, it was the start of a living nightmare for Louise, who was diagnosed with fibromyalgia, a long-lasting condition causing pain throughout her body, in February 2019 after struggling to cope with stiffness and pain.

Before growing up, she had always dislocated her knees easily and suffered from random pain, but hadn’t thought much about it.

She added: “I’ve dislocated my knee a few times but just assumed it was normal. I was told I was double-jointed.

“I had random unexplained pain when I was younger and always had migraines, but I didn’t worry about it.”

Although she sometimes felt like she was “walking in cement” due to muscle stiffness, she showed courage and even enjoyed a trip to Paris later that summer.

But the car accident changed everything for Louise.

And, in January 2020, she started experiencing tremors and what she describes as “stroke-like symptoms” like slurred speech.

Since then, she has seen many specialists, who have given her a variety of different diagnoses.

At one point, it was suspected that she had multiple sclerosis (MS), a condition that can affect the brain and spinal cord.

At others, doctors thought she had everything from severe headaches and migraines to a possible Chiari malformation, where the lower part of the brain digs into the spinal canal.

In the meantime, Louise says her symptoms ran wild as she experienced everything from slurred speech to excruciating headaches and a suspected stroke, leading to numerous investigations, including MRI.

Feeling increasingly isolated and depressed, for months she walked in and out of A&E with a host of related issues until, desperate for help, in January 2021 she saw an otologist – an ear disease specialist – who suggested she join Facebook groups for people with similar symptoms for support.

It was her eureka moment because, through members of a Facebook support group, she was told about a leading expert in her type of symptoms, at the Neuroinstitut in Barcelona, ​​Spain.

After reviewing his MRI and other scans and talking to him, in April 2021 he was diagnosed with craniocervical instability – meaning there is excessive movement between his skull and across most of the cervical vertebrae.

He recommended spinal fusion surgery, which uses donor bone to strengthen the spine, and skull base decompression surgery – an operation that involves removing a small section of bone from the base of the skull. .

She also had a private consultation there, where she was diagnosed with Ehlers-Danlos Syndrome (EDS) – a genetic form of hypermobility.

Deciding to stick with these diagnoses, Louise’s hurdle now is finding the funding to go to Spain, so she can be treated by the surgeon she trusts so much.

Unfortunately, with two private operations, airfare and accommodation to pay for while she recovers, she needs £35,000 for the surgery and an additional £15,000 for additional costs.

So, she started a GoFundMe page, appealing to kind strangers to help fund the medical care she believes will save her life and eventually see her enjoy the first dance of her wedding.

She said: “Having surgery would mean we would get our lives back together, so I could be there for my children and my fiancé.

“With everything we went through, it had a huge impact on me, but also on my family, who became my caregivers.

“We just want to get back to normal life. It would be invaluable.

“It would give us a second chance at life. We could have our dream wedding, which has been put on hold.

“I used to dance with my kids every day and miss those precious moments so much.”

You can donate to Louise’s fundraiser here: https://www.gofundme.com/f/help-louise-with-life-saving-spinal-surgery