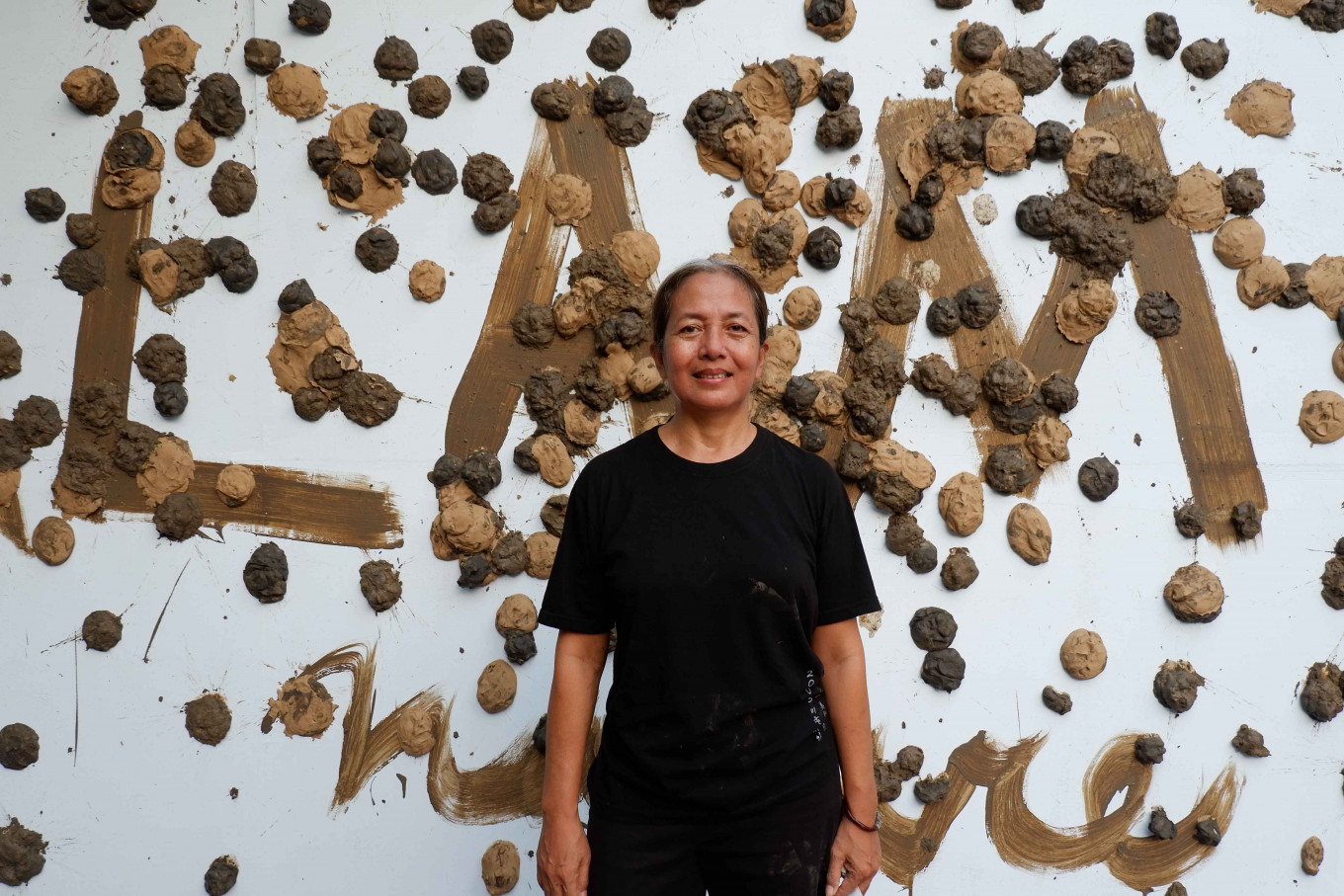 The Bandung Arahmaiani-born artist is known for using her art and activism to fight for the environment, as well as helping local communities apply traditional methods and wisdoms to develop sustainable farms.

Reflecting on today’s environmental perils, renowned artist and environmental activist Arahmaiani persists in her criticism of the government for its lack of action to protect and preserve the environment.

She turned her fury into a performance art called furious mother earth.

The performance begins with Arahmaiani writing the word “Okay(nature) in all caps on a white wall as his audience sits next to a table covered in balls of clay. After she finishes writing, she picks up some of the clay balls and throws them against the wall. She then asks the audience to stand up and throw the balls until the wall is splattered with clay.

The 20-minute performance art is Arahmaiani’s way of visualizing that nature is sick because of humans constantly harming it.

The 60-year-old artist blames humans for many “natural” disasters, including the COVID-19 pandemic.

“This pandemic is a sign from nature to all of us that we need to change our mindset and our way of life to stop ourselves from causing more destruction on this planet,” she said.

On the national art scene, Arahmaiani is known for using her art to critique religious intolerance and radicalism, as well as calling for interreligious dialogue and peace. However, his recent work primarily explores the relationship between nature and human activity that has led to environmental problems.

She used “furious” in the title of her latest performance, she says, to “convey the message that Mother Earth is furious with us and we will suffer if we are not careful in our behavior towards nature”.

Before the pandemic, Arahmaiani was inspired by President Joko Widodo’s campaign promise to save the environment, which she says was not delivered. So she created a piece called shadow of the pastthat she performed at the Taman Prasasti Museum in central Jakarta, kissing trees while strolling through the museum grounds, her face and hair covered in clay.

Arahmaiani often uses clay symbolically, as its basic components, soil and water, are the sources of all life. 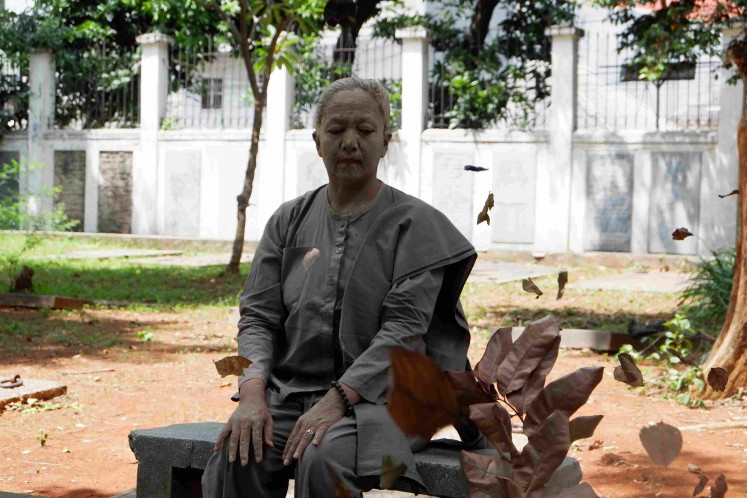 Arahmaiani used to travel back and forth between Indonesia and Tibet, working with the monks there to start a tree-planting project while also working on his art projects.

Since the arrival of the pandemic and the resulting travel restrictions, she has focused on developing organic farms in Bali and Yogyakarta.

In Yogyakarta, she teamed up with santri (Islamic boarding schools) from Pondok Pesantren Amumarta in Bantul Regency as well as residents and farmers from the Bumi Langit community, also in Bantul.

In Bali, she worked on various conversation projects in collaboration with the Sanggar Paripurna community of Bona village in Gianyar and the Kebun Berdaya community of Tegeh Sari village in Denpasar. Organic farms designed by these communities have inspired others in nearby Balinese villages to follow suit.

Arahmaiani and communities have used permaculture to develop sustainable and self-sufficient agricultural ecosystems in alignment with local customs and wisdoms.

Permaculture embraces the natural arrangements of thriving ecosystems in the design of productive and self-sufficient human habitats, and is a movement founded by Australian researcher Bill Mollison.

According to Arahmaiani, however, ancestral Indonesians were practicing the technique long before Mollison coined the term in 1978.

“In the past, people saw themselves as part of nature, not as the ruler of nature. That’s why they had a harmonious relationship with nature. In contrast, people in the modern era tend to be destructive Forests are cleared and natural resources such as oil and coal are [taken] for money,” she said. 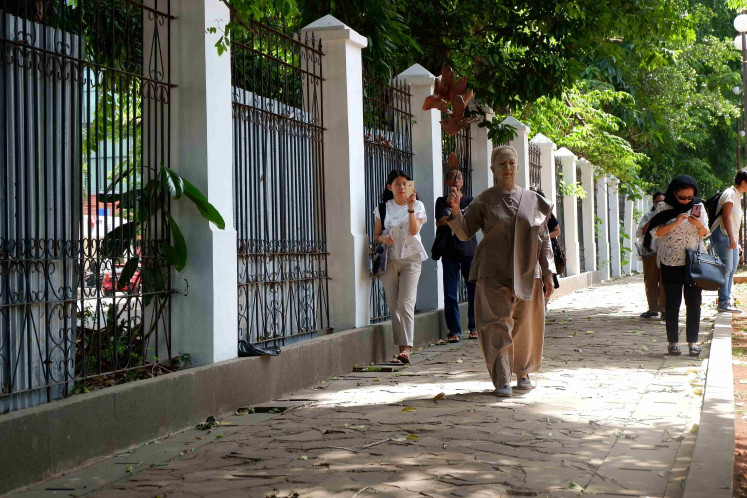 Balinese puppeteer I Made Sidia, who is also artistic director of the Sanggar Paripurna arts center in Gianyar, expressed his gratitude to Arahmaiani for helping his students better understand nature and love local traditions through his art.

He recalled Arahmaiani once performing one of his famous pieces, flag projectat Sanggar Paripurna and inviting his students to dance during the performance.

“This performance taught us to be open-minded, to love our nation’s noble values, and most importantly, to care for the environment and fellow human beings,” Made said.

He also said Arahmaiani taught his students to grow vegetables and fruits using organic methods, dividing them into gardening groups with agriculture-inspired names like Kambing (Goat), Sapi (Cow), Anjing (Dog) and Ayam (Chicken) for a gardening contest at the arts center.

The competition helped students understand the benefits of organic foods and the dangers of pesticides to the human body, Made said.

“They don’t litter now. Before meeting Arahmaiani, they had no discipline to properly dispose of garbage, especially plastic waste. environment,” he said.

Krisna Waworuntu, who runs an organic farm within the Bumi Langit community, said he was grateful to collaborate with Arahmaiani.

“Our collaboration is not too artistic but functional, because I want its benefits to be sustainable for society and the environment,” he said.

Bride-to-be who longs to dance at her wedding but faces internal decapitation at any moment needs £50,000 for brain surgery so she can walk down the aisle