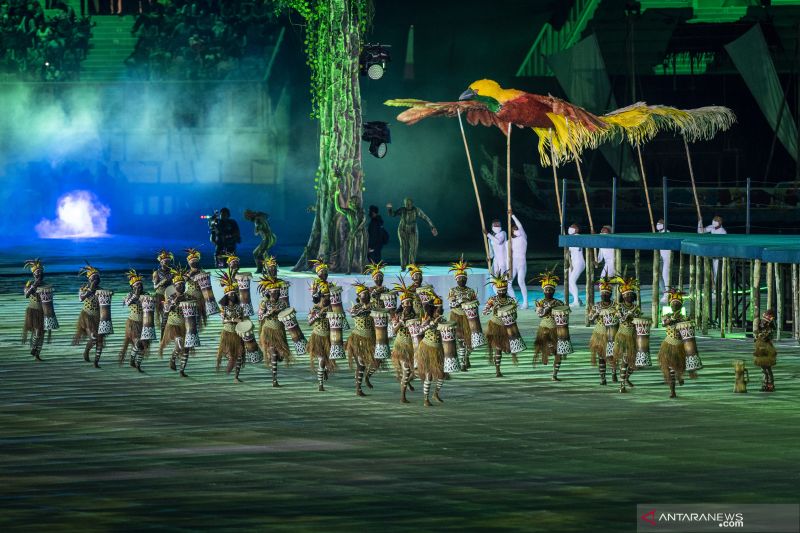 The spotlight at the Papua Rise Sports Palace during the 20th National Sports Week (PON) was captured not only by the athletes, but also by 20 children from the Nafas Danau Senani (NDS) dance studio.

The small power plants rocked the arena hosting the big sporting event and captivated viewers when they performed the traditional dance, Akhokoy.

It is a unique dance in Yokiwa village in Sentani.

The dance, accompanied by songs in the Sentani language, has a meaning dear to its inhabitants. He praises Ondoafi, or the traditional chief, respected by all he leads.

It turns out that it is a dance that cannot be shown to just anyone but is actually part of a sacred ritual in Yokiwa village.

â€œThis dance is a (mixture) of song and song that has been around for a long time and tells about events and events in everyday life. Sung from generation to generation, the song teaches values â€‹â€‹and offers life lines to the audience, â€explained Markus Rumbino, accompanying the children of the NDS Studio to perform the Akhokoy dance.

Akhokoy was introduced to the people of the archipelago at the first National Sports Week event in eastern Indonesia to showcase the grandeur, diversity and beauty of Papua, a slice of heaven on earth .

A legacy of three tribes

Akhokoy reflects how notions of unity and diversity can merge, giving birth to beauty. This is the reflection of the three tribes of Yokiwa village: Awoitauw, Fiobetauw and Mimitauw.

The three tribes unite to accept their respective diversities and finally create a legacy that can be passed on from generation to generation.

Ondoafi positions himself as someone who is respected for his role in the protection and unity of the peoples of the three tribes.

The dance is also to be performed only by indigenous people from Yokiwa village wearing traditional Sentani clothing.

The dance is led by a man. He wears a tasseled skirt, with a typical Sentani pattern adorning his body. He also wears a Soul, a musical instrument made of seashells, through which he gives instructions.

The conductor also guides female and male dancers in acorn costumes to sing and dance.

They also perform songs in the traditional language used in Sentani. Only these three tribes have the skill.

Therefore, Akhokoy is executed exclusively by people from Yokiwa village and not by foreigners freely.

In addition to praising the greatness of the traditional leader, Akhokoy reminds the community not to be arrogant.

Therefore, the events sung through chants to complement the Akhokoy dance are continually updated, so that they may be relevant to the present generation.

Rumbino noted that one of the latest events included in his performance at Papua Rise Sports Palace was the Sentani Flash Flood which devastated them.

This incident was incorporated into Akhokoy to remind the people of Sentani not to harm the environment and protect nature at all costs, so that such an event does not happen again.

The importance of Akhokoy’s role as a way of life and also as a reminder rooted in the heart of the Sentani community is what makes this dance highly preserved.

In order for this event to be widely known to the Indonesian public, the permission of the natives of the village of Yokiwa is necessary.

One of Akhokoy’s dancers, under the direction of NDS, Dinna Awoitauw, admitted to being proud to be able to bring traditional dance from her village to the whole country.

She introduced Papuan diversity through artistic forms while learning this sacred dance in depth.

She thinks it’s a good way to remember the roots of the current generation.

â€œThis Akhokoy dance is very good. Through the Akhokoy dance, we discover the folklore of the past. This is told or repeated through Akhokoy’s dances and songs, â€she remarked.

Akhokoy for the new generation

It took Awoitauw and his friends at NDS Studio years to learn more about Akhokoy.

At first she was hesitant because she thought she was still young. However, her concern for presenting the beauty of Papua through art motivated her to explore Akhokoy.

Time is passing. Seconds turn into minutes, minutes turn into hours, and finally years passed as she perfected her workout. It paid off, because it made her and others proud.

Not only does it become a method for the children to understand the roots and depth of its culture, but now Akhokoy is also a way for the children of Yokiwa village to introduce the diversity of Papua to the nation.

For example, in 2016, NDS Studio managed to win a victory at the Karawitan Concert of Indonesian Children held at the Jakarta Arts Building (GKJ).

Akhokoy also bridges the gap between Yokiwa’s younger generation and the outside world.

Akhokoy is expected to prosper for generations to come, not only to preserve the historic roots of Yokiwa Village, but also to offer a little glimpse of Papua’s diverse beauty to the people of the archipelago.