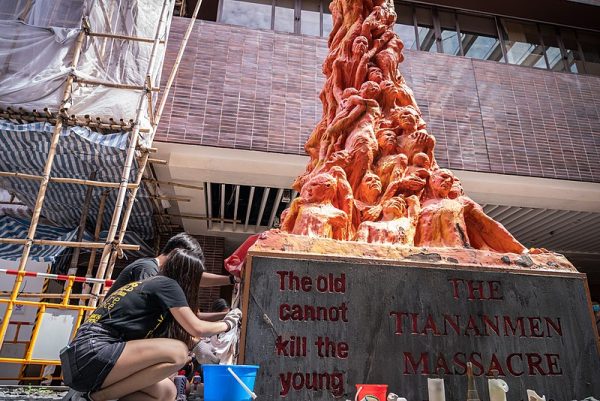 The order of reference is “an attack on the memory of the Tiananmen crackdown,” artist Jens Galschioet said.

A Danish artist is seeking to recover his sculpture in Hong Kong commemorating the victims of China’s Tiananmen Square crackdown in 1989 as the deadline for its removal passed on Wednesday.

Jens Galschioet said in an emailed statement that he has hired a lawyer and hopes he can transport the sculpture out of Hong Kong “under orderly conditions and without damage.”

Last week, the University of Hong Kong demanded the removal of the “Pillar of Shame” sculpture by 5:00 p.m. (09:00 GMT) on Wednesday. No immediate action was taken as the deadline had passed.

“We are still seeking legal advice and are working with related parties to deal with the matter in a legal and reasonable manner,” the university said in an emailed statement.

An activist group, the Hong Kong Alliance for the Support of China’s Democratic Patriotic Movements, released a letter from lawyers representing the university on Friday saying the sculpture would be considered abandoned if not taken to the city. delays.

Galschioet had loaned “Pillar of Shame” to the group, which disbanded last month amid a crackdown on political activism in the semi-autonomous town. The sculpture has been in Hong Kong for 24 years.

Chinese leaders sent the military to end pro-democracy protests in Tiananmen Square in Beijing in 1989, killing hundreds if not thousands.

Stay up to date with the story of the week and develop stories to watch from across Asia-Pacific.

The ruling Communist Party has crushed any public discussion or commemoration of events in mainland China. For years, the only major memorial on Chinese soil was an annual candlelight vigil in Hong Kong, but authorities have banned the gathering for the past two years, citing concerns over COVID-19.

Galschioet told the AP he would prefer the sculpture to stay in Hong Kong, but as a second choice it could be placed elsewhere until it can be brought back to the city or to another site in China.

The artist said last week that it would take time to move the sculpture and expressed concern that the tight deadline set by the university meant authorities intended to destroy it.

The artist’s statement said his lawyer sent a letter on Tuesday requesting a hearing on the matter and that they were seeking an amicable resolution. He did not want to reveal the name of the law firm.

â€œI want to stress that I consider any damage to the sculpture to be the responsibility of the university,â€ he wrote.