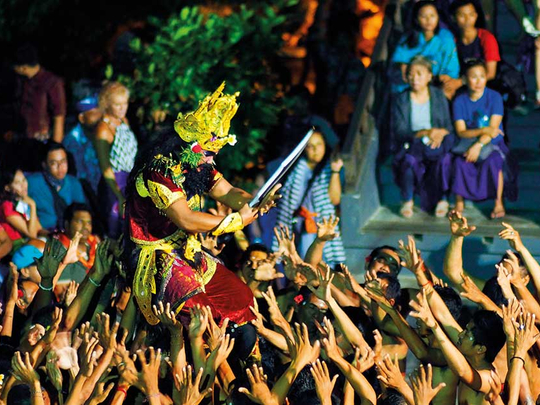 A gripping drama of Balinese dance and music

Of all the popular dances on the culture-rich Indonesian island of Bali, the Kecak (pronounced “ketjac”) dance is perhaps the most dramatic. Taken from the Hindu epic Ramayana, the dance tells the story of Prince Rama and his rescue of Princess Sita. Unlike other dances, there is no orchestra in gamelan – the traditional ensemble music of percussion instruments. Instead, a troupe of over 200 shirtless men, dressed in traditional black and white checkered gingham (considered a sacred cloth), cheer and deflect to the chorus – making a wonderful cacophony of ‘cak-acak-acak’ synchronized clicking sounds while shrugging and waving their hands – creating a dramatic backdrop for a hypnotic performance. There is symbolic relevance to the checkered gingham the performers wear: it symbolizes the good (white) and bad (black) spirits that are meant to function as one within each individual.

In the song of the monkey, the performers powerfully interpret the scene using whispers or chants to portray a scene of battle or emotional tumult from the epic. The original Ramayana is a much longer story; Kecak chooses only a few specific episodes from this sprawling epic to serve as highlights. The epic is condensed into two hours combining dance and theatrical performance largely without any dialogue except for short intermissions of interactive comic relief. The most popular scene is that of the herd of monkeys, led by their leader Hanuman, who help Prince Rama fight the evil King Ravana and reunite him with his kidnapped wife Sita. The men who play the monkeys are seated in tight concentric circles around a small central space, which is reserved for the main protagonists who act out the scenes of the epic.

Each character has their own set of distinct gestures. Rama and Sita are gentle and slow while Ravana is mischievously loud and Hanuman is playful yet powerful. It’s clear that Hanuman is the action hero of this story; his costume highlights the physique of the dancer the most. When Hanuman interacts with the crowd, it’s a shock to find himself challenged by such an epic character. Entertainment value aside, it brings to mind the duality of this character: Hanuman is strong but full of wicked humor; a faithful and reliable friend of Rama but at heart an unpredictable monkey.

The men who create the backdrop of the epic tale impress of themselves: with their postures and their outstretched hands, they take the stage open like a tree with sudden branches. The songs change in pitch and key to simulate the sounds of forests. They swing their arms and imitate the calls of the waves to signify the ocean, and even stand up later to represent an army of monkeys. This high-energy dance drama is highly engaging and impossible to experience through photographs alone.

The story follows Rama and his beloved consort Sita as they walk through a forest. Ravana, the demon king of Lanka, has his eyes on Sita. He uses magical powers to draw Sita’s attention to a golden deer and Sita, enchanted by the deer, asks for this magnificent animal as a pet. Rama, unable to refuse his beloved’s request, leaves her with Laxmana, his brother, who is supposed to keep her but also soon disappears from the scene, leaving Sita alone at home.

After that, Ravana makes his grand entrance – the most memorable entrance of any character. One of Kecak’s dancers lets out a roar, followed by a sinister laugh. Shortly after, a towering red figure emerges from the gates – a human barrier made by the cheering men. The entrance is very dramatic and can easily transfix a viewer who would otherwise want to document it digitally. Ravana’s movements and steps are heavy and powerful, and his outstretched arms give the impression of a villain.

Next is the star of the show: Hanuman, the crowd favorite and mightiest warrior of the Monkey Clan. The Balinese Kecak departs from the original Ramayana epic by placing Hanuman as the main star of the narrative. He enters like a comedian, full of monkey jokes, the same way a monkey from Uluwatu would if he liked your hat or your camera. There is no special music or cue to announce Hanuman’s entry. His presence is made known by loud dramatic sighs and gasps that rise to applause from the men as well as the audience. He appears out of nowhere, climbs onto the stadium seats and hops before charging towards the stage with full fanfare. He is a symbol of loyalty and steadfastness, here to help Rama save Sita.

The modern form of Kecak is said to have originated in the Gianyar village of Bedulu in the 1930s following the intrigue and interest of Walter Spies, a German expatriate artist and historian. His intention was to create a dance that was both authentic to Balinese traditions and appealing to Western audiences. The idea was to create a performance that could be enjoyed by a small coterie of expats like him, as well as friends and guests on the island.

I Wayan Dibia, an Indonesian artist and scholar specializing in Balinese performing arts, contradicts this popular belief and claims that the Balinese were already developing this form before the Western impulse. During the 1920s, a well-known dancer, I Limbak, had incorporated Baris movements – traditional war dances from Bali – into the lead role of the Kecak. This has inspired some scholars to suggest that Limbak devised a show based on the Ramayana which was accompanied by a chorus of Kecak rather than an orchestra of gamelan, as would have been usual.

The name Kecak is derived from the “cak” sound – pronounced “chak” or “chok” – which is sung in complex interlocking patterns that match the rhythmic patterns played on the gamelan. The dance drama became popular among visiting tourists after it was first recorded in Bali by David Lewiston, a London-born world traditional music collector, and released in 1969 by Nonesuch Records.

Some believe that Kecak has its roots in the sanghyang, an ancient trance-inducing exorcism dance performed as part of traditional Balinese rituals. “While the Kecak is a creation of this century, it descends from something much older – the trance dance, the exorcism dance called Sanghyang,” Lewiston said. “His ancestry is clear. Apparently, the Kecak is a re-enactment of the battle described in the epic Ramayana… But as discerning observers have noted, the Kecak is first and foremost a dance of exorcism. His connection to the Sanghyang remains unbroken.

Sanghyang is based on the idea that a supernatural force enters the body of an enraptured performer. The force, identified as hyang, is an invisible spiritual entity that has supernatural power in ancient Indonesian mythology. This spirit can be divine or ancestral. Locals believe that Sanghyang dances are sacred dances that should only be performed during Balinese Hindu religious events and strictly within temple premises, never simply to entertain tourists.

In the book Dance and Drama in Bali, authors Walter Spies and Beryl de Zoete write: “Most of the movements are of exorcist origin and together work to produce a tremendous unity of mood…to cast out evil as if by an incantation. The shouts, the crowd, the raised hands, the devouring of isolated silhouettes, the broken lines of a disconcerting melody for the bhutas [demons] which can only advance straight ahead, all reinforce the exorcist effect.

After the Kecak dance, one of the central protagonists, usually an older man, usually performs a Sanghyang Jaran dance. Riding a wooden horse, the man charges through a pile of burning coconut shells. Flames shoot out as he charges through the embers and he continues in his trance-like state until he is dragged away.

The Kecak Monkey Dance, beyond its disputed origin, presents itself as a dynamic and evolved journey of an ancient, epic art form, truly Balinese but with international appeal.

Archana RD aka B’lu is a United Arab Emirates-based artist-journalist who writes about art and global culture.

A treat for tourists

In its pure form, the Kecak dance is a religious ceremony performed for several hours on successive nights for three to four months. It is a purification process in the Balinese tradition to exorcise evil during times of peril and pestilence.

While audiences and photography are not welcome at religious Kecak performances, a version called “Tourist Kecak” is catching up with increased support from local event organizers and artist communities who want to stage the show for a fee. . It is an abbreviated version of the original dance, performed for entertainment. This improvised version of the Kecak dance is almost never watched by the Balinese in their villages.

Nowadays, dancing is a daily feature at many temples in Ubud and Uluwatu. The one performed by the Taman Kaja Community, a small community of 140 families at Jalan Raya in Ubud, is one of the most famous. Outside of Ubud, the most popular in Bali takes place inside the Uluwatu temple campus. The Kecak dance here is always performed just before sunset, around 6 p.m.

A rat made of RAT: the COVID sculpture made from medical waste to boost the recycling effort