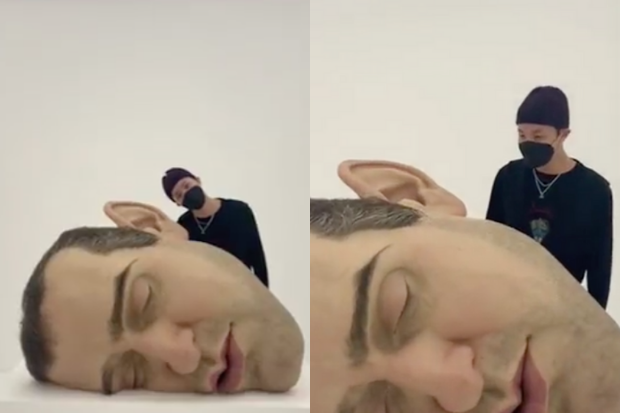 BTS member J-Hope just posed with a sculpture that appears to resemble actor Paolo Contis, and fans couldn’t help but be jealous of the K-star’s ‘museum date’ -pop.

J-Hope showed a video of himself looking at a sculpture of a huge sleeping head on the K-pop boy group’s Twitter page yesterday, November 1. The artwork is “Mask II” by Ron Mueck, according to a 2017 Release by the Museum of Fine Arts in Houston, Texas.

Shortly after the video was released, some Filipino BTS fans pointed out Contis’ resemblance to the artwork which they dubbed the “Paolo Contis sculpture”. The actor’s name also popped up on Twitter yesterday in the K-pop and music categories.

“Sana (hopefully) all Paolo Contis with J-Hope,” @lalalisa_yahh joked, showing a screenshot of the video.

“At this point, I’m also jealous of Hobi. What I would give to be able to see a sculpture by Paolo Contis,” said another user @nica_twt. Hobi is J-Hope’s nickname.

At this point I’m also jealous of hobi. WHAT I WILL GIVE TO BE ABLE TO SEE A SCULPTURE BY PAOLO CONTIS. https://t.co/cP2yyuqfNm

Another fan, @jminsberry, referenced a statement Contis made in September, where he claimed he went to Baguio City with actress Yen Santos “as a friend,” amid the question of his breakup with LJ Reyes.

“Go to the J-Hope Museum [and] Paolo Contis as a friend,” joked the internet user.

meet at the jhope museum at paolo contis as a friend pic.twitter.com/IuLMVk1A65

“Paolo Contis got noticed by Hobi before me. Life is so unfair,” lamented one, @thebtszone.

paolo contis was noticed by hobi before me. life is so unfair. pic.twitter.com/w9hiRfBwt7

According to the Museum of Fine Arts in Houston, “Mask II” is a mixed media self-portrait de Mueck and is “four times larger than life”.

Other K-pop idols who have visited the artwork are Cha Eun-woo from boy group Astro and Rosé from girl group Blackpink. J.B.

The latest entertainment news straight to your inbox

The Abandonment of Automobile Culture Leads to a Greener Future | Opinion