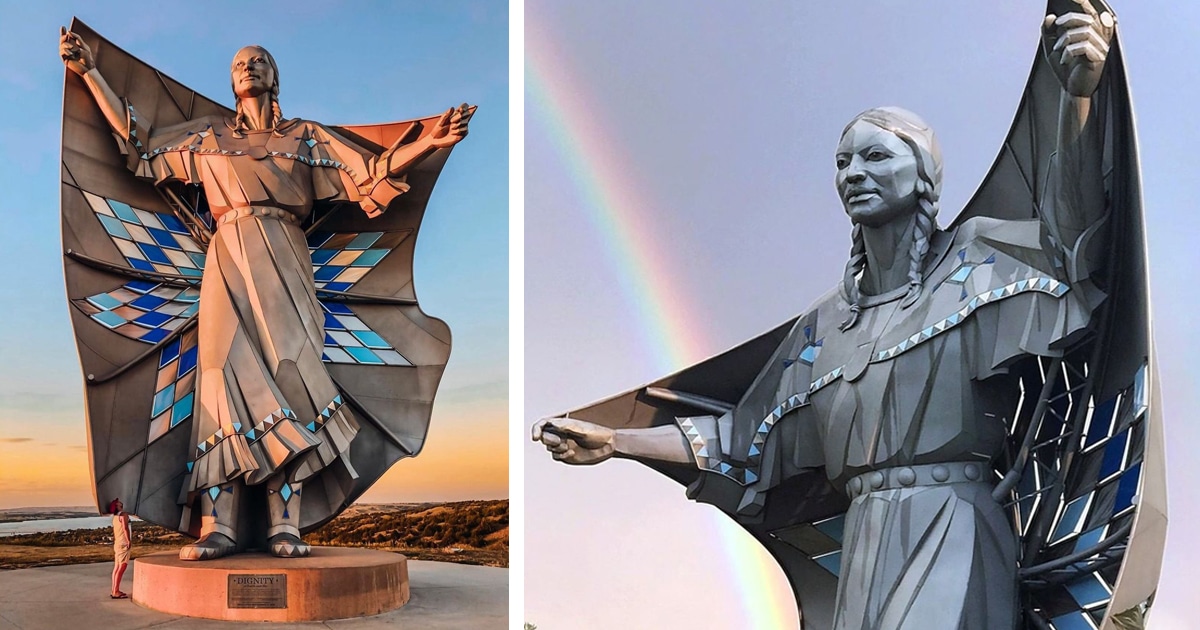 This beautiful 50 foot tall sculpture in South Dakota named “Dignity” was recently erected, it was made to respect native culture. from r/interestingasfuck

Above the Missouri River in South Dakota stands a magnificent sculpture that is a beautiful tribute to the indigenous nations of the Great Plains region. The 50-foot tall work is called Dignity of Earth and Sky—often abbreviated to just Dignity— and is a statue of an Aboriginal woman wearing a Plains-style dress and receiving a star quilt. By highlighting this figure, the memorial recognizes the often overlooked group of women from the Lakota and Dakota nations.

Artist Dale Claude Lamphere created the beloved monument. To complete the portrait of the woman, he referred to three Native American models – aged 14, 29 and 55 – while studying the rich traditions of Lakota and Dakota culture. “My intention” Lamphere explains“is for the sculpture to be an enduring symbol of our shared belief that everything here is sacred and in a sacred place.”

The woman wears a dress pattern inspired by an 1850s two-skin design and holds a star quilt, which turned out to be the most striking part of the whole sculpture. The stretched quilt, a symbol of respect and honor in Native American culture, features 128 blue stainless steel diamonds that flutter when the wind blows. It also appears differently throughout the day. When the sun is up, the rooms dazzle in daylight. At night, they are illuminated with LED lights and look dramatic yet tranquil.

If you want to visit Dignity, it is located off I-90 in Chamberlain, South Dakota. While you’re in the area, don’t miss another opportunity to learn about the indigenous peoples. the Atka Lakota Museum and Cultural Center is a short drive away.

the breathtaking Dignity The statue is a 50-foot-tall sculpture that pays homage to the often overlooked group of women from the Lakota and Dakota nations.

The stunning star quilt features 128 blue diamond-shaped pieces that move in the wind and shimmer in the sun.

The sculpture is beautiful at night:

An interactive map reveals the Indigenous lands you live on

Artists give Yorkton community a ‘hug’ with unique snow sculpture