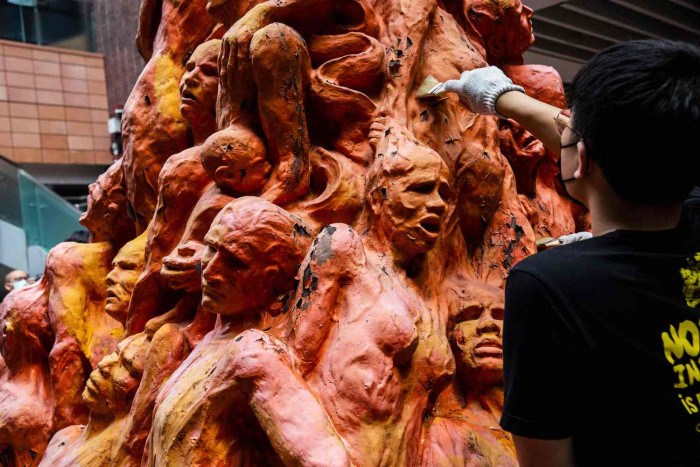 A member of the Hong Kong University student union cleans up the “Pillar of Shame,” a monument commemorating the victims of the 1989 Tiananmen Square crackdown at the University of Hong Kong in June. University authorities ordered the statue to be removed. (AFP file photo)

HONG KONG (Reuters) – Hong Kong’s oldest university has ordered the removal of a sculpture commemorating protesters killed in China’s Tiananmen Square crackdown in 1989, according to a legal letter released Friday.

The eight-meter-high copper sculpture was the centerpiece of a candlelight vigil held on June 4 to commemorate those killed when Chinese tank-backed troops opened fire on unarmed pro-democracy activists in Beijing .

The sculpture shows 50 anguished faces and tortured bodies stacked on top of each other, and has been on display on the college campus for more than two decades.

The move was condemned by Danish sculpture sculptor Jens Galschiot, who told AFP his withdrawal illustrated the ongoing purge of dissent in the once Frankish and semi-autonomous business center.

In a legal letter to the now dissolved Hong Kong Alliance (HKA) – the organizer of the annual Tiananmen vigils that drew thousands of people but will likely never be held again – the University of Hong Kong (HKU ) asked the group to “immediatelyâ€¦ arrange for the sculpture to be removed from the university premises” by 5:00 pm on Wednesday.

â€œIf you don’t remove the sculptureâ€¦ it will be considered abandoned,â€ the letter reads.

He added that the university will treat the sculpture as it sees fit without further notice.

Richard Tsoi, a former member of the HKA standing committee, said the university’s request was “unreasonable” and that he had sent a request to the university chancellor to keep the sculpture.

â€œAs an area of â€‹â€‹free speech and academic freedom, the University of Hong Kong has a social responsibility and mission to preserve the ‘pillar of shame’,â€ Tsoi said in a statement.

In an email response to AFP on Monday, sculptor Jens Galschiot said he was “shocked that there are plans to desecrate the only memorial of such an important and important event in Chinese history.”

â€œI wish the Pillar would stay in Hong Kong, where it is today. It would be historically correct. The pillar is an important work of art that has a historical connection to Hong Kong and should remain on Chinese territory, â€he said.

HKU said its request was “based on the latest risk assessment and legal advice.”

Groups and locations linked to the commemoration of the June 4 massacre have become the latest target in a sweeping national security law that China imposed on Hong Kong last year to quell dissent after huge and often violent demonstrations for democracy.

The Hong Kong Alliance disbanded in late September after arrests of its leaders under the Security Act and a police raid on the June 4 museum. The museum has also been closed but it still maintains an online presence.