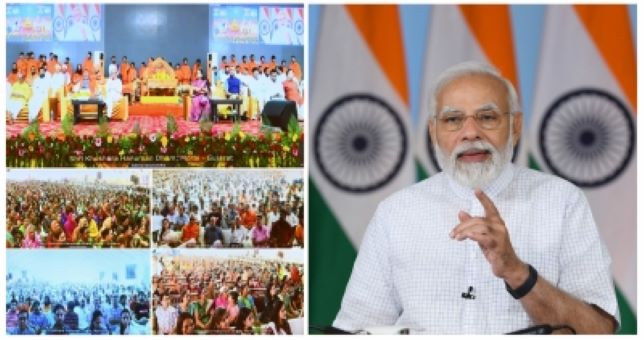 Our civilization, our culture have played a big role in the stability of India: Modi

New Delhi, April 16 (IANS): Prime Minister Narendra Modi said on Saturday that in the face of the vicissitudes of thousands of years, our civilization and culture have played a big role in keeping India steadfast.

Greeting worshipers on the occasion of Hanuman Jayanti, the Prime Minister said the dedication of the 108ft statue of Lord Hanuman in Morbi is a happy occasion for worshipers all over the world.

The Prime Minister said that the plan to establish four such statues across the country was a reflection of the determination of “Ek Bharat Shreshtha Bharat”.

Modi explained that Lord Hanuman unites everyone with his spirit of service and everyone is inspired by him.

“Hanuman ji is that symbol of strength that has given dignity and empowerment to communities living in the forests. “Hanuman ji is a common thread of EK Bharat Shreshtha Bharat,” he said.

The Prime Minister explained that “Ram Katha” organized across the country in various localities and languages, binds everyone as one in devotion to the god.

Modi stressed that it was the strength of our spiritual heritage, culture and tradition that kept separate parts united even during the difficult period of slavery and this strengthened the unified efforts of national commitment to independence.

“Faced with the vicissitudes of thousands of years, our civilization and culture have played a great role in keeping India steadfast,” the prime minister stressed.

The Prime Minister said: “Our faith and the stream of our culture is harmony, equality and inclusion. This is best reflected in the fact that Lord Ram, despite being fully capable, harnessed everyone’s strength to accomplish his tasks.

“Ram Katha is the best example of Sabka Saath-Sabka Prayas and Hanuman ji is a key part of it.”

The statue that was unveiled is the second of four statues installed in the four directions across the country, as part of the “#Hanumanji4dham project”. He settled in the west, at the Bapu Keshvanand ji Ashram in Morbi. The first statue in the series was erected in the north at Shimla in 2010. Work on the statue in the south at Rameswaram has begun.

Ramadan changes my relationship to wellness and the culture of restlessness