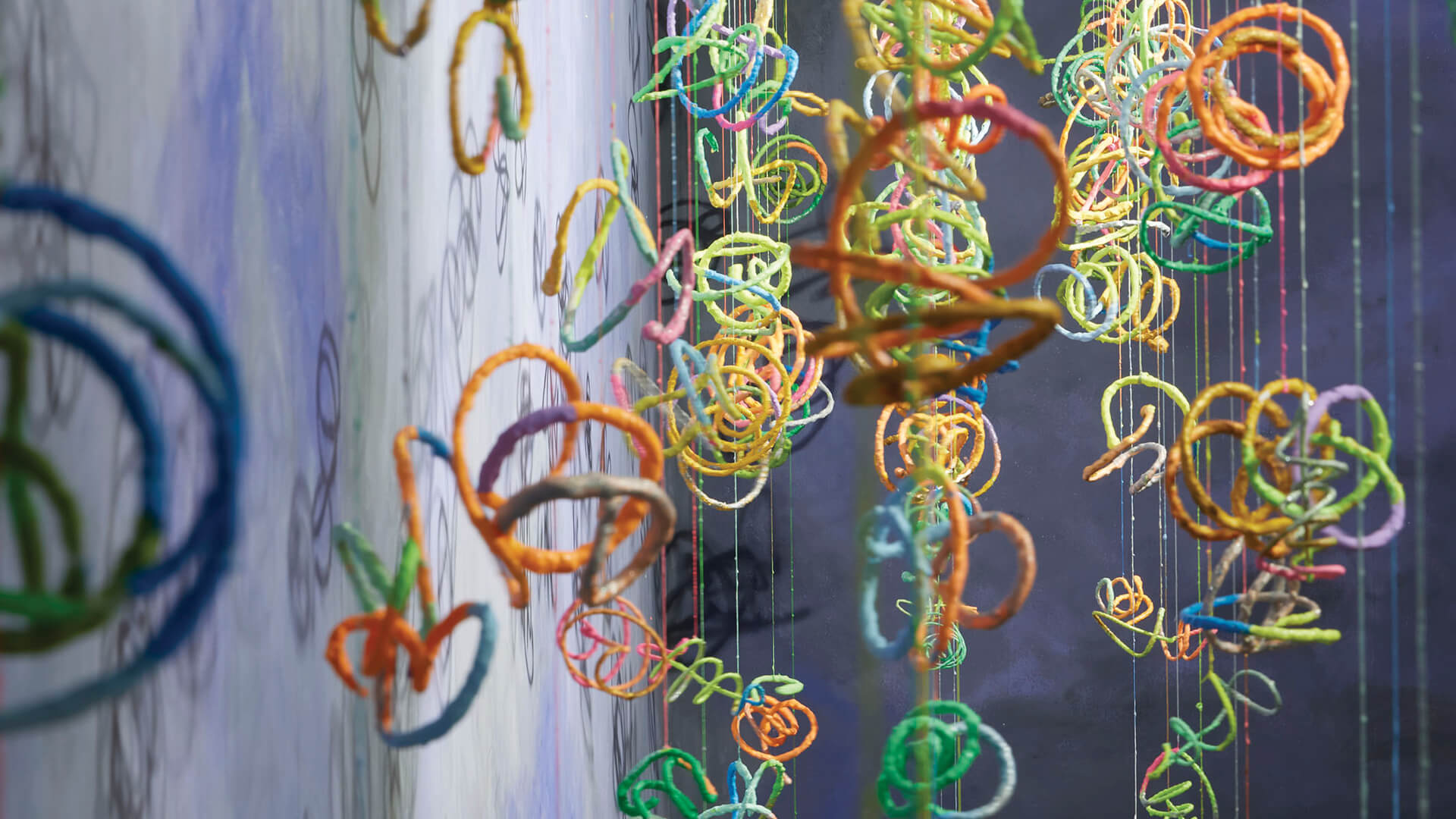 Artist and activist Mit Jai Inn is inspired by the community and aesthetic aspects of growing up in rural Thailand under the Thai monarchy. His various experiences like practicing as a Buddhist monk and training as a Muay Thai boxer shape his vision. His works often cross the physical boundary and seem hybrid in nature – at the crossroads of painting, installation and immersive sculpture. Inn says he only recently started making a living as an artist. His art aims to offer alternatives for humanity and society in general, which he admits are often utopian ideas. A rebel since childhood, Inn continued to oppose oppressive authoritarian cadres through her work.

“…while my art reflects my activism, I think the word ‘art’ is reductive in its associations. Its deeper and broader meaning is much more utopian,” he says. I interview the artist on the sidelines of his personal exhibition, entitled Imaginary world at Ikon Gallery, UK.

Rahul Kumar (RK): You say you paint not only with your eyes, but with all your senses, the whole entity. Please talk about your process and how you came to this format of artistic creation?

Mit Jai Inn (MJI): My practice is very physical. I use my fingers, hands and a palette knife when painting, blending colors in a rhythm that feels natural to me. It is a meditative process that helps me calm subconscious anxieties.

When I was younger, I studied in Vienna, where I developed an interest in psychoanalysis; dreams, esoteric and occult research, and how they intertwine with the body. This is also related to my intuitive night practice in the studio.

RK: In continuity, alongside a unique process, you also constantly changed the format of your work. With first works for walls with split canvases painted on both sides, then sculptural volutes, and more recently mounds of paint that remain sticky in open weather. Why the need for constant reinvention?

GM: I have always worked against pre-existing structures. For my own development, but also to expand the techniques and languages ​​of painting. For instance, Aquarius Nerves (2021), the work that I have done for Imaginary world with artists Kengo Brown, Dion Kitson and Daniel Salisbury, is site-specific and takes the form of automatic paint that springs into action and drips bands of color onto the canvas. This is entirely new work for me, coming out of my time in Birmingham during my residency at the School of Art. My works are different because they respond to different sites, climates, cultures and to the evolution of painting itself, from modernism to post-Internet.

There are many ways to work with paint and canvas. These are simple materials, but with infinite potential. my beginning Remedial works started out as grids with slits that caused their edges to fall and bend. Now they look more like quilts, due to their weaving technique.

RK: As an activist, you advocate for political change in your country. You participated in protests to end the monarchy in Thailand. How does your art reflect this quest which is yours?

MJI: Art and activism are linked for me. My campaign for political reform in Thailand enters into my work in several ways; through my use of colors like red, blue, yellow and silver, for example, because of their association with national and indigenous identities and the Thai monarchy.

But while my art reflects my activism, I think the word “art” is reductive in its associations. Its deeper and broader meaning is far more utopian. My ongoing series titled Dream works, which I started in 1999, resonates with this broader idea of ​​art as a utopian dream. The series consists of painted canvases with internal slits that I made inside so they can be bent, hung, looped, or laid on the ground and resist conventional restraints.

RK: How does the idea of ​​“flowing positive energy from the earth and nature to humans” fit into your artistic practice?

MJI: Much of my work is about energy. Dream Tunnel is a combination of two ongoing series, wall works and Screens, which aim to sanitize and sanitize the spaces in which they are presented. Suspended without weight, Screens are breathing like navigation devices, circulating karma. In Buddhism, karma is the force produced by a person’s actions in one life that influences what happens to him in future lives. In Dream TunnelI create a room within a room that has a magical glow, deliberately using reflective minerals that compel us to look outside of ourselves and into the transcendental.

RK: You are known to often give your works to viewers or other artists to incorporate into their own works. Why?

MJI: From the age of nine through my mid-teens, I trained as a novice monk, learning under the Djittabhawan Buddhist College. They taught us a lot about meditation, minimalist living and almsgiving. Almsgiving is a Buddhist practice where you pay homage to monks by offering them clothes and food. This act of giving has taught me its value, which is part of why I’m passionate about the idea of ​​giving my artwork as a gift. I can freely entrust my work to the care of others without preciosity. #dreammantra share this mentality. Visitors to my exhibition can take one of the wireframe sculptures or double-sided canvases as a form of community exchange. I ask them to perform a pledge, which reflects a series of sayings inspired by spiritual notions of gifts and “instructional works” from conceptual artists like Lawrence Weiner and Bruce Nauman.

RK: Tell us about the works in your recent solo exhibition at the Ikon gallery, Imaginary world. You used a unique format to make your paintings immersive and meditative while merging 2D into a 3D/sculptural form.

MJI: All the works I have spoken about so far are in the Imaginary world exhibition at the Ikon gallery, but Midlands Dwelling has all the qualities you mention. It’s an installation that viewers can walk into, with colorful and silver paint that reflects the surroundings of my outdoor studio in Chiang Mai. The whole room was like a makeshift studio to me; a place to create in peace and solitude and to socialize, which I have now left to the people of Birmingham.