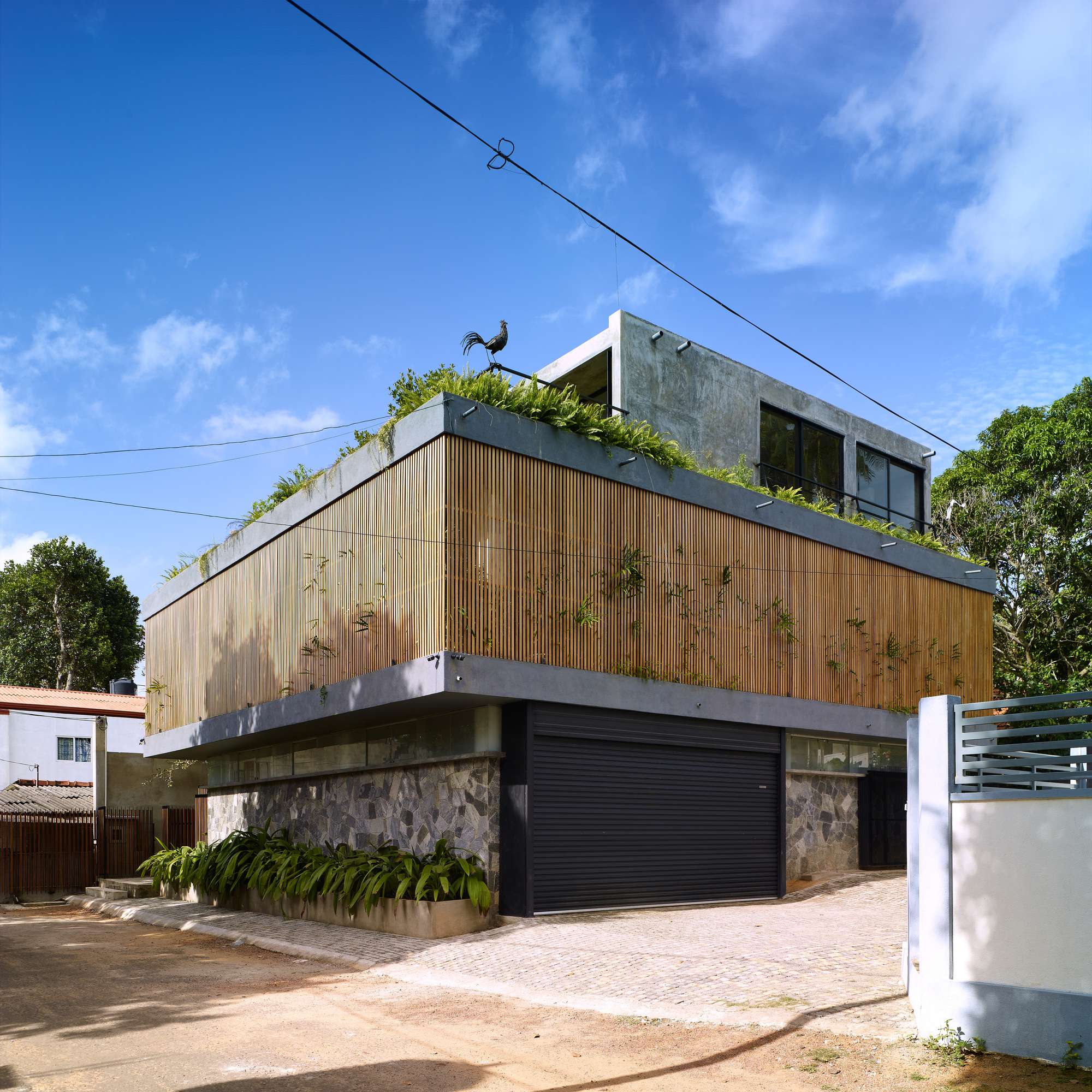 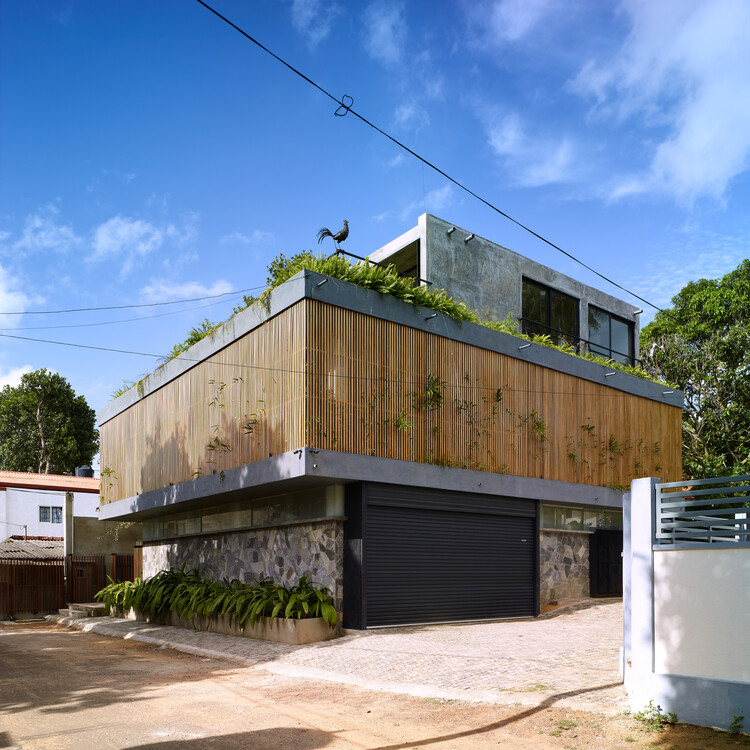 Text description provided by the architects. The site purchased by the client was a plot of 14 perches; bordered by an access road and a private road on both sides. The client’s requirement was for a four bedroom home that would give the family privacy and relaxation after a busy day’s work. Trees and greenery were mostly placed towards the back of the field. Therefore, since the initial visit; and the schematic design, it was obvious that the main spaces should be located towards the rear of the site. From this approach, the design then developed to create an envelope of space that would make the most of the available greenery, within and around the site.

Given the location of the site, which was flanked by two roads, it offered the best opportunity to design a sculptural, road-sensitive structure. Therefore, today the two-story, four-bedroom residence stands like a sculpture; void of any boundary walls flanking the roads, but without compromising the safety or privacy of residents.

The exterior – The design includes two main elements that define its character. A solid rubble wall provides the visual foundation or base, upon which the cantilevered wooden slatted box rests, which visually floats. Between the two elements are unobstructed linear glass strip windows, which separate the heavy base of the stone wall from the wooden structure above. This highlights the floating effect, seemingly resulting in a gravity-deifying arrangement. The house responds to the harsh environment of the dusty, unshaded road ahead, via a wooden screen and the dense rubble wall. Yet the same exterior seems deconstructed to absolute transparency, to merge with the shady garden and borrowed landscape, from which the rear part of the land benefits.

Design – The entry way to the house is through a sculptural wooden slatted door at the front, which leads to the side garden. Thereafter, the entrance to the house is through the side and rear gardens. As the most visually pleasing views are towards the rear of the site, the main spaces of the houses are located that way. The double-height main space provides connectivity with the interior space as well as a lush and fresh exterior. All bedrooms and the entertainment room take advantage of the exterior view; filtered through the wooden screen and a strip of foliage, which becomes a private pocket of greenery in each space. The strip of foliage placed between the sliding windows and the wooden screen compensates for the absence of a physical garden in such spaces.

The house was designed around all the trees that existed on the site, especially a large Jak tree, which mainly extended its canopy over the site. The preservation and integration of all the trees provided much needed shade and cooling to the house. The roof houses a roof garden on the front part and a living room and a terrace towards the rear part.

Climate response – The house was designed around all the trees that existed on the site, especially a large Jak tree, which mainly extended its canopy over the site. The preservation and integration of all the trees provided much needed shade and cooling to the house. The design is sensitive to tropical climatic conditions. The wooden screen facing the public road not only provides security and privacy, but actively defuses the rays of the western sun and the monsoon rains. The cantilever box protects the strip of glass windows, much like a roof. The double-height glazing that surrounds the main space stops 2′-0” before the level of the slab. This guarantees maximum ventilation inside even when all doors and windows are closed. This space between the glazing and the slab creates a constant chimney effect, which makes the interior a very comfortable place to live, even during the hottest and most humid months.

Finishes – The finishes of the house are modern, but rustic and the house is devoid of any decorative elements and remains true to the materials used. Most interior finishes are cement, wood, glass and steel. The rustic look and neutral palette enhance the greenery and merge the indoors with the outdoors.