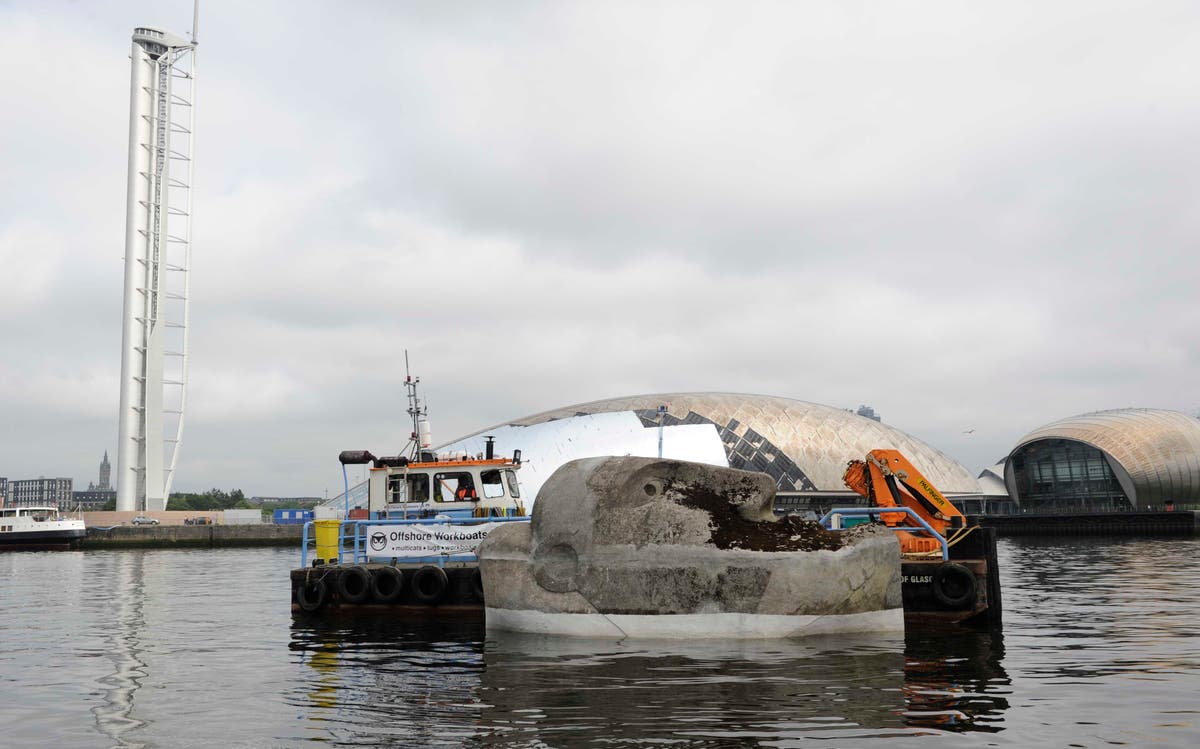 A forgotten floating head on display again after 33 years

The sculpture of a giant floating head that languished in oblivion for decades is once again on public display after being rediscovered and restored.

Richard Groom created the 27-ton concrete and steel artwork for the Glasgow Garden Festival, which took place in 1988.

After the event it was abandoned on the banks of the Clyde and was in danger of being destroyed until it was found and moved to Rothesay Dock East on the north bank of the river, where it was then widely forget.

However, after Groom’s death in 2019, the artist’s family and friends set out to find the sculpture, restore it and preserve it.

The giant head, which was created with the help of unemployed shipbuilders, has now traveled upriver and will be moored in Canting Basin near the Glasgow Science Center until October 6, also on the day Glasgow Open House. in mid-September.

Andy Groom, the artist’s brother, said: “My family and I were very touched at Richard’s funeral where so many of his friends and colleagues commented on all of his work, especially the floating head.

“It became clear very quickly that we had to find it, fix it, float it. We couldn’t believe our luck when we found and met Offshore Workboats, who rescued her.

“We then tracked down and met Ian Henderson, the owner of the head, who allowed us to put the head back on display for the public to see.

“We are truly grateful to all of them, and to everyone else, who enabled us to restore the sculpture and bring it back to the heart of Glasgow.”

The work was conserved and partially restored by workers from Concrete Repairs Ltd, as part of a project led by Sculpture Placement Group (SPG) and the Estate of Richard Groom.

The conservation work has been carried out in such a way that the head still shows signs of aging and that nature encroaches on the man-made artifacts, so that the moss that has gradually grown on the sculpture remains in place.

After October 6, it is hoped that someone will come forward to give a proper longer-term home to the sculpture, which could also be displayed on dry land.

SPG co-director Michelle Emery-Barker said: “People have very fond memories of the Garden Festival and a huge attachment to Glasgow’s heritage as a world center for shipbuilding, so we’re really delighted that the sculpture floats down the Clyde once. again.

“It’s an amazing story – a work of art that was nearly destroyed, rediscovered after decades, restored by today’s boat builders, then towed down the river and proudly displayed to the public.

“We think it will really resonate with people and hopefully be an attraction for the open house.”

A crowdfunding campaign led by SPG and the family raised £7,000, helping to defray the cost of the restoration, which was carried out by Concrete Repairs Ltd, while £13,000 came from donations and grants.

“The 1988 Garden Festival holds a special place in the memory of many Glasgow residents and marked a turning point in Glasgow’s transformation from industrial powerhouse to cultural centre.

“The bailout of Richard Groom’s sculpture and accompanying workshop program with the Glasgow Science Center provides an exciting opportunity to engage Glasgow’s communities in the legacy of the Garden Festival and the shipbuilding heritage of Glasgow.”