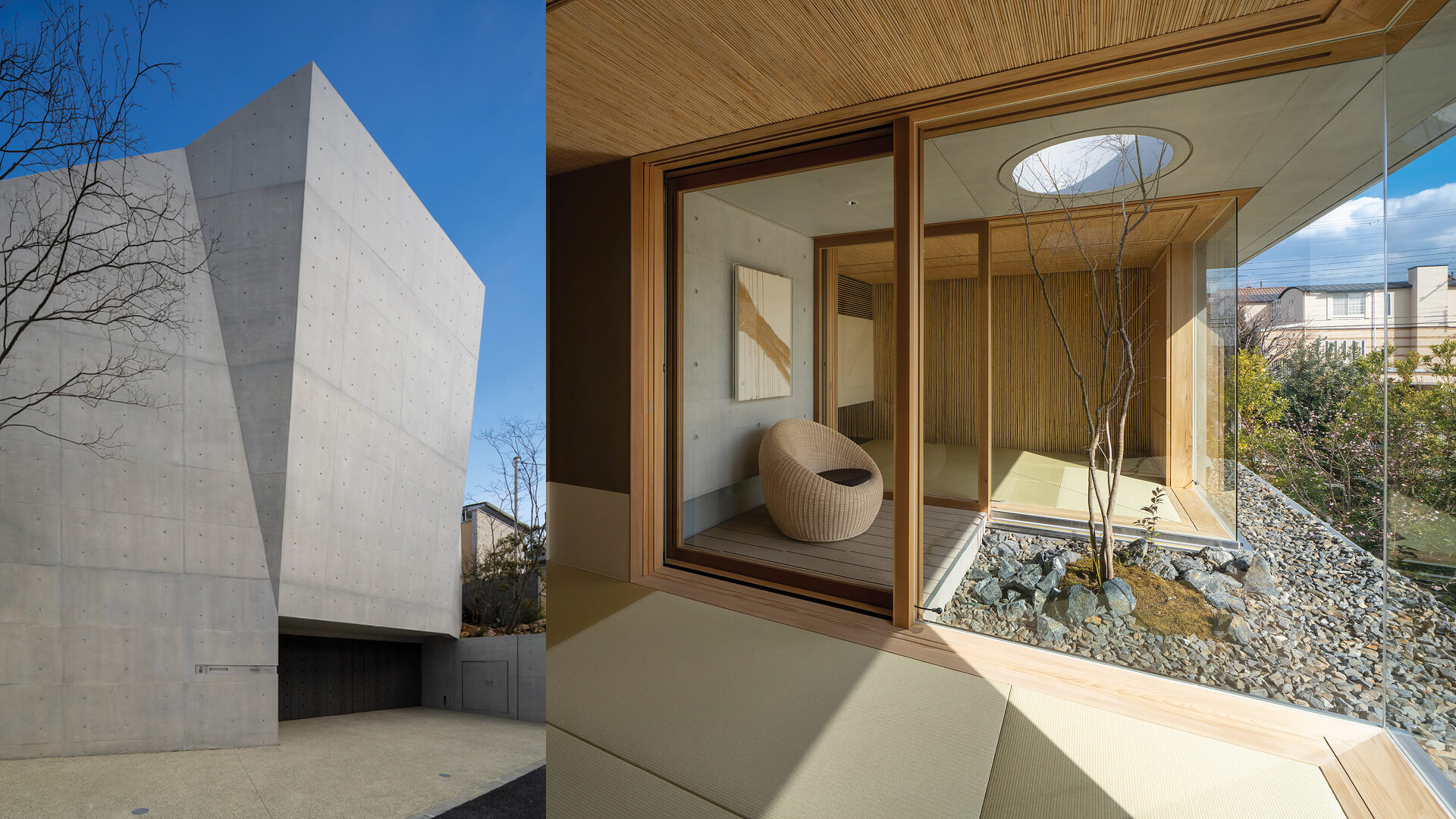 A dramatic exposed concrete facade forms this inward facing Japanese home, aptly named Sculpt. The house is the latest work in residential architecture from Hyōgo-based studio Maniera Architects & Associates. The firm led by architects Kazuo Oe, Terumi Oe and Taisuke Oe is a specialist in contemporary homes, where it has executed more than 150 projects in suburban cities across Japan. Sculpt is located in a neighborhood of Ashiya, Hyōgo characterized by a heterogeneous nature of suburban architecture. The townscape is made up of modest two-storey houses that house contemporary facilities amid strict government regulations and limited plot sizes.

The sharp geometry of the structural skin and the sheer opacity of its surface attract attention, especially the absence of openings for peeking inside. According to Maniera Architects & Associates, the building’s surreal gated facade was the result of an architectural intervention that considered accommodating a tree growing just outside the plot. The building therefore presented no landscape or architectural elements at the entrance, but only a monolithic presence engulfing itself in its silence.

You enter Sculpt through a large black door at the bottom of the slightly protruding part of the facade. Inside, streams of daylight pour into a cozy lobby that features a small seating area and a beautiful white staircase inspired by the architecture of revered Italian architect Carlo Scarpa. The staircase design features a combination of pointed and curved elements cast in concrete. Maniera Architects & Associates mentions that the idea was to challenge the use of concrete – both in the facade, the staircase and other elements of the house – to create complex three-dimensional forms.


By treading the steps, one arrives at the first floor which is the living quarters of the house. The living room and the family dining room are designed facing each other and separated by a linear passage which ends in a glass door. The spaces are arranged around a grid of four concrete columns that create a cross-shaped arrangement. The second floor consists of the family’s private spaces including the master bedroom and a bathroom overlooking a karesansui, or rock garden.

While concern for the owner’s privacy speaks volumes at the entrance, inside, however, the architects have deliberately created open spaces that are linked to the exterior. The living quarters as well as the quiet family territory on the second floor capture distant views of Mount Rokkō, while inside the building itself these are connected to small pockets of greenery sculpted on the site.

For the design team, a special space within Sculpt is a basement bar. The space has a vintage charm, a nod to 1970s style. From an oxidized copper counter, to walls clad in antique brick, to furnishings made up of velvet curtains, dark mirrors, and dark mirrors. a vintage car, it contrasts sportingly with the minimalist contemporary character of the area that dots the rest of the house.

Through a highly defined opaque façade to the flowing interior spaces, within Sculpt channels of interaction with the outside world take center stage. The choice of materiality too, consisting of oak furniture, laminate surfaces and stone slab floors, fits well with the residential scheme.

Japanese houses previously posted on STIR include Tsuruoka House in Tokyo by Kiyoaki Takeda Architects, River Sea Residence in Hyogo by Kawazoe Architects, Setoyama Villa in Shizuoka by Moriya and Partners, and Soil House in Fukushima by ADX.

Name of the project : Sculpt