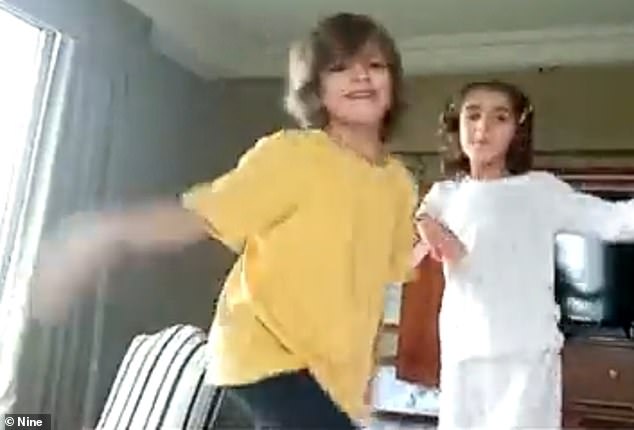 Heartwarming images that should make all Australians proud: Enthusiastic Afghan orphans who fled the Taliban are seen playing in hotel quarantine before starting a new life Down Under

A courageous orphanage founder, Mahboba Rawi, quickly launched a secret mission to take the children in her care out of Afghanistan to safety after the Taliban toppled the government in August.

Ten orphans, aged between four and 20, were crammed into a van and covered to cross the Pakistani border before flying to Australia.

While most Australians may dread two weeks of hotel quarantine, for ecstatic new residents, it’s a small price to pay to be away from the danger of their war-torn homeland.

Ten Afghan orphans celebrate the start of their new life in Australia after escaping the Taliban. Images (pictured) taken inside their hotel’s quarantine room show two of the young children dancing happily

As they prepare to start their new life Down Under, a video taken from inside their bedroom shows the children celebrating as they enthusiastically jump onto their beds.

“They deserve to be this happy, they are children and they need to be happy,” Ms. Rawi, the foster mother of the orphans, told A Current Affair.

After her son’s tragic drowning almost 30 years ago, she dedicated her life to helping widows and orphans in Afghanistan through her Australian aid organization Mahboba’s Promise.

As a teenager, she was forced to flee Soviet authorities without her family and spent two years in a Pakistani refugee camp until she married and moved to Australia.

When the Taliban took power, she made two foiled rescue attempts to get the children out of the country, until they finally snuck across the border, where they hid in a hotel room in Islamabad until their flight.

Now in Australia, the kids spend their time doing puzzles and drawing while Ms Rawi finalizes plans for their new life in Sydney after quarantine is over.

Ms Rawi asks Australians to embrace the 10 new children and calls for a donation to help care for them.

“The first hug makes me cry you know, I never thought I would get them here in Australia.” This first hug is my dream come true, â€she said.

“We are going to take care of them emotionally, mentally – they come from a country in a war zone.”

Wow! America’s Got Talent The Champions winner V. Unbeatable returns in Dance Plus 6