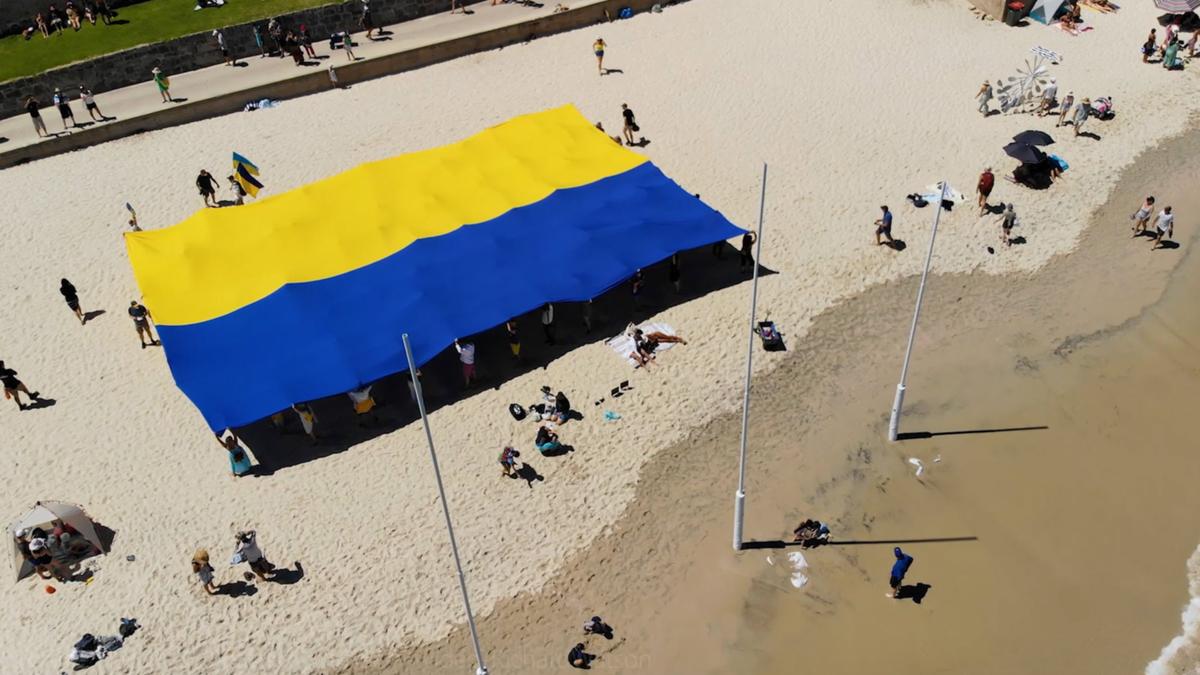 The 18th annual Cottesloe Sculpture by the Sea is open, with 70 sculptures from 13 countries displayed in the sand – but it was a giant, uplifting flag in the sky that caught the attention of weekend visitors.

On Sunday, the arts community in WA unfurled an 18m by 12m Ukrainian flag, showcasing its vibrant bands of yellow and blue to people from great distances and great heights.

Perth artist Jarrod Taylor said it had been devastating to watch the conflict caused by the Russian invasion unfold.

Your local newspaper, when you want it.

“What is happening to these people in Ukraine is inhumane and should not happen,” he said.

He said the flag marked a sign of solidarity from WA artists and was part of a global movement called Artists Support Ukraine, which aims to draw attention to the crisis.

Before the war, Sculpture by the Sea was in talks to hold an exhibition in the Ukrainian city of Mariupol, but as Russian military activity increased, the exhibition was dropped.

David Handley, founding director of Sculpture by the Sea, said it was important for the artistic community to come together and show support for Ukraine.

Mr Handley said the artists had been working on their exhibition despite COVID-induced uncertainty over whether the event would go ahead.

Of this year’s sculptures, 32 are from Western Australia, 23 are international and 15 are interstate.

Shelter is an interactive creation in the shape of a rabbit’s head.

The piece was made from cans of cat food and forms a pod-like structure that highlights the packaging waste.

“This is the 50th Sculpture by the Sea to be held in Australia or Denmark and it’s a big milestone for us,” Mr Handley said.

“Some of the artists who are with us have been involved since 1998 when it was held in Albany.”

“You don’t have to be creative to soak up the high energy and creativity of the show,” Cook said.

“One of the great things about this event is that it’s so accessible and available to people in Western Australia.”

Have you seen the shimmering, shimmering sculpture by Francisco Carbajal?