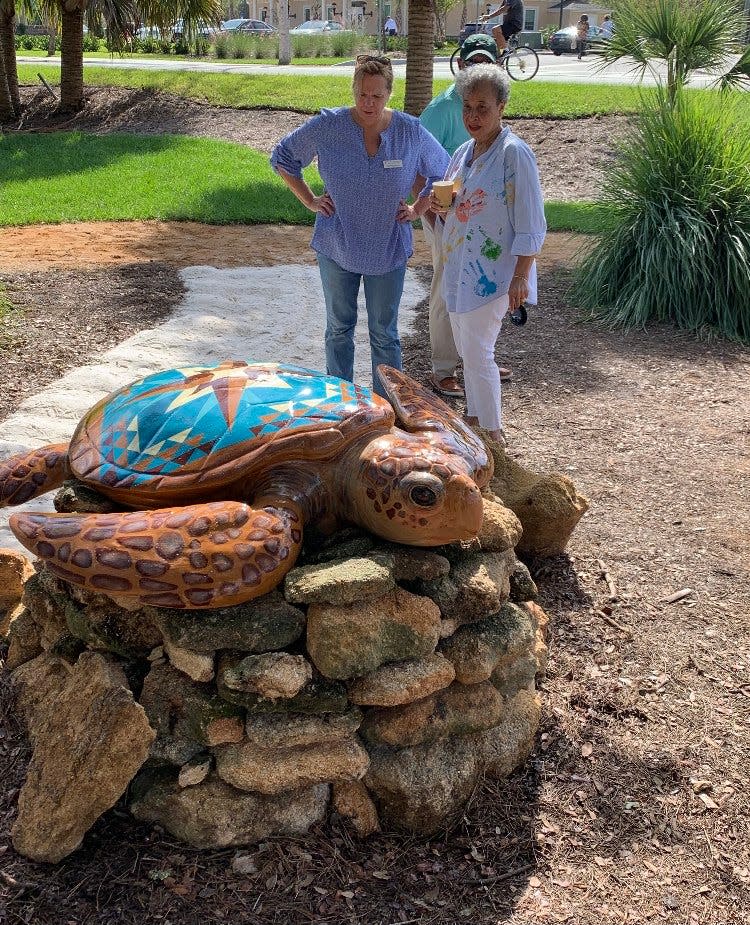 “We’re trying to get full press to try to find this turtle and bring it home,” said Nancy Crouch, executive director of the Palm Coast Arts Foundationsaid in a telephone interview.

Quilty’s sculpture was dedicated in October 2019 at Creekside in Grand Haven, a park on the corner of Colbert Lane and Waterfront Park Road, Crouch said.

Quilty is the sixth turtle on the trail that features fiberglass loggerhead turtle sculptures with names like Pablo, Garfield, and Winged Victory. There’s never been a problem with a turtle before, she said.

Bettie Eubanks, the artist who created Quilty, noticed that Monday was missing.

“We’re just in shock,” Eubanks said. “The turtle belongs to the city. The turtle is for the city and it is for us to remember Palm Coast, to consider it and to visit it as an artistic community.

Quilty was sponsored by Bill and Pat Verhagen. Bill Verhagen is a financial adviser at Innovative Financial Solutions, which is across the street from where Quilty was taken. Verhagen said the park is privately owned but open to the public.

Verhagen said it cost $5,000 to sponsor Quilty. He said that although the artist received a stipend for his work, Eubanks gave plenty of time to paint the turtle.

Quilty’s taking is listed as a grand theft on a police report.

Verhagen said if Eubanks was paid for all the time she worked on the turtle, the cost of the sculpture would total between $8,000 and $10,000.

“It’s just shocking to us to think anyone would think of stealing a turtle,” Verhagen said.

He added that he and his wife didn’t notice he was missing until Eubanks walked into his office.

“She asked us ‘What happened to the turtle over there?’ and it was the first time he realized he was missing,” he said.

Crouch said she thought taking the turtle, which weighs about 60 pounds and measures about 4ft by 5ft, was not a caper for one person. The blue and white turtle paint pattern was inspired by a quilt from the 1700s, according to the Palm Coast Arts Foundation website.

“They had to unlock it and everything. It took a few people to do it,” Crouch said.

She said there was a $2,000 reward from the donors for Quilty’s “return and arrest of the miscreants”.

Crouch asked anyone with information to call the Flagler County Sheriff’s Office at 386-437-4116.