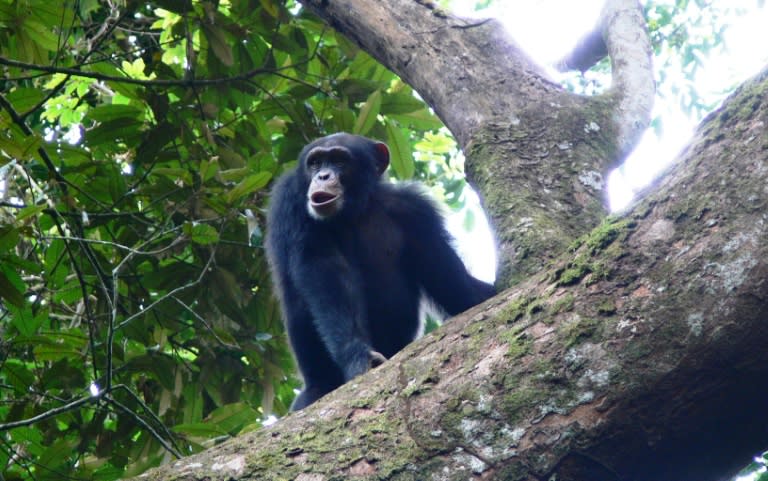 Chimpanzees in one part of Guinea crack and eat nuts while others refuse to do so even when offered tools, according to a study published on Monday, and the difference could shed light on their culture.

As humans, we are said to have a cumulative culture: skills and technologies are passed down and refined from generation to generation, producing more sophisticated behaviors than a single person could ever imagine.

Some experts believe this is unique to humans, and that traits such as chimpanzee tool use rather develop spontaneously in individuals.

Their theory holds that animals can innovate certain behaviors without a model to copy.

Part of the evidence for this is captive chimpanzees, which have been seen to apparently independently develop simple tool use like picking up with a stick and mopping with a leaf.

But these behaviors differ from comparatively more complex techniques, such as cracking nuts, and captivity is very different from the wild.

So Kathelijne Koops, a professor in the Department of Anthropology at the University of Zurich, designed a series of experiments involving wild chimpanzees in Guinea.

While a population of chimpanzees in Bossou in Guinea crack nuts, another group just six kilometers away in Nimba does not.

Koops wanted to see if the Nimba population would develop the behavior if introduced to the tools to do so.

The researchers set up four different scenarios: in the first, the chimpanzees encountered shelled palm nuts, and stones that could be used to crack them.

In the second, there were palm nuts in shells, pits, but also edible palm nut fruits. In the third, they found stones, unshelled palm nuts and cracked nut shells.

And the eventual experience offered them Coula stones and nuts, which are more commonly and easily cracked by chimpanzee populations who use the technique.

Each experiment lasted several months at a time, mostly in 2008, but in some cases as late as 2011.

But while the Nimba experiment sites were visited and explored by dozens of chimpanzees, who were filmed with cameras installed on site, they did not once attempt to crack a nut.

“Having observed the Bossou chimpanzee nutcracker many times, it was so interesting to see the Nimba chimpanzees interacting with the same materials without ever cracking a nut,” Koops told AFP.

The study, published Monday in the journal Nature Human Behavior, suggests that nut cracking may in fact be the result of cumulative culture, similar to that of humans.

The researchers acknowledged the difficulties of studying chimpanzees in the wild, including the inability to control the number of visitors to their sites.

Between 16 and 53 chimpanzees visited each site during the experiments and primate behavior specialist Professor Gisela Kaplan, who was not involved in the research, wondered if the numbers were sufficient to draw general conclusions.

“As in human society: the number of innovators is relatively low in animals, and the expression of innovation also depends on many social and ecological circumstances and pressures,” said Kaplan, professor emeritus of animal behavior at the University of New England, Australia.

The study authors acknowledge that there are other possible explanations for the chimpanzees’ reluctance, including the possibility that they were simply not motivated to eat the nuts.

But since chimpanzees in neighboring areas crack nuts, they consider it unlikely that the Nimba population will not be interested in a new food source.

Koops said the involvement of a “normal-sized wild community” of chimpanzees and the length of the experiments provide insight.

“Of course it would be interesting to test other communities,” she said.

But findings so far suggest there may be “greater continuity between the cultural evolution of chimpanzees and that of humans than is normally assumed”.